Dubai’s Roads and Transport Authority (RTA) has announced that it will deploy 368 “smart” buses to transport about 8873 students in 17 schools during the new academic year that begins in September. 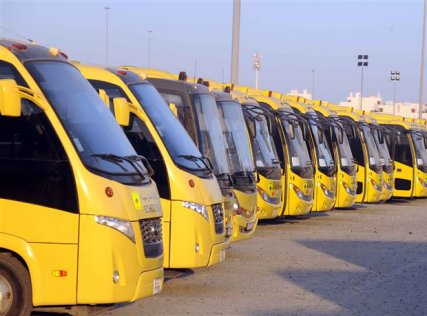 The service improvement is part of Dubai and RTA’s efforts to run excellent and reliable school transport service.

The buses are smart, environment-friendly and fitted with safety and security features as well as well-trained drivers and supervisors. Each bus is equipped with surveillance cameras connected to monitors at DTC’s Control Centre to monitor students’ movement while sitting and alighting from buses.

New technologies added to the school bus fleet enhance the safety of students. The engine switch off button is now located at the rear end of the bus behind the seats. So, the driver is obliged to walk through up to the end of the bus to stop the engine, meanwhile ensuring that no student is left behind on the bus before the doors are locked.

A new smart app DTC School Bus has been launched to enable parents to track the movement of their children’s journey from and to the school, besides the GPS satellite system, which sends notifications to parents about the time their children board or alight from buses in their shuttle between schools and homes.

It is now possible for new schools to join the service via the DTC School Bus App, or direct contact with the DTC Customers Service Centre (80088088).