The step is in line with RTA’s efforts to support the UAE Artificial Intelligence Strategy and realise RTA’s first strategic goal (Smart Dubai), the authority said in a statement. 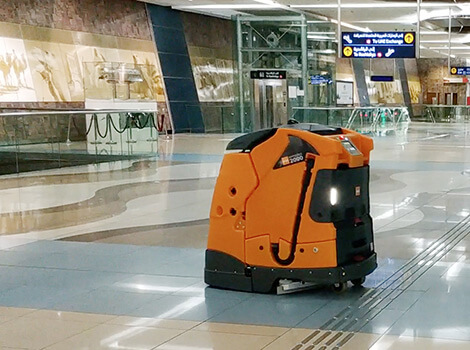 “The use of robots in cleaning Dubai Metro stations is an experimental step considered the first of its kind worldwide in using such technology to clean metro stations. Once the success of the trial is verified, the technology will be deployed in other stations,” said Mohammed Hasan Al Amiri, Director of Rail Maintenance, RTA.

According to the RTA, the robot has been designed in accordance with international standards, and is highly effective and efficient in reducing the amount of water used in cleaning, and providing a great level of sterilising.

“It can also be pre-set to perform automated cleaning patterns of floors, without human intervention except for limited and simple steps such as adding water and programming. The programming can be reset to enable the robot to clean floorings of complex designs,” said Al Amiri.

The robot has several sensors and sonar receiver capable of shifting between spaces, detecting barriers and accordingly avoid a collision. The laser-powered sensors along with the sonar cover a 360-degree circle. It has a 90-litre water tank, and measures 135x90x128 cm in size, rendering it fit for use in public areas without causing inconvenience to station visitors.