Tahawultech.com visited Huawei HQ in Shenzhen, where Joe Kelly, Vice President of Corporate Communications, explains how 5G will revolutionise the world – if the US government lets it.

Kelly met us at Huawei’s University, where every year thousands of employees from around the world receive training to keep up with the fast speed at which the Chinese smartphones and carrier provider is moving. 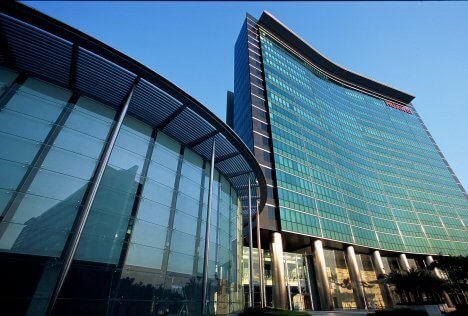 Huawei’s 5G vision is a great one, and so far, they’ve been the only one able to make it a reality.

Kelly says they have been working on 5G for years, pretty much as soon as 4G launched in 2010. “Huawei has invested more in R&D than most of its competitors combined”, he tells us, and that’s what made all the difference.

However, while to the general public speed is what makes 5G so much better than its predecessor, Kelly has a different opinion on the matter.

“5G has three characteristics – the first and most obvious is a much faster connecting speed than before, which is interesting, but maybe the least interesting part of 5G,” says Kelly.

“The second benefit, and possibly the most life changing, is the much lower latency on the line. Latency on 4G network is about 15 milliseconds. This means that if you have a phone call you won’t hear the delay, but imagine another scenario – you’re in a self-driving car driving at 70mph when the car recognises an obstacle in front of you. The car will travel 1.5 metres before fully stopping – what if the obstacle is a child?”

Kelly believes 5G will fundamentally change the way our society operates, enhancing and developing new applications in all industries. “5G can provide the 1-millisecond latency we need to change the way we operate in medicine, technology, and much more.”

The third characteristic Kelly mentions is the number of concurrent connections that a 5G environment will be able to sustain, much higher than what 4G can provide.

“When we moved from 3G to 4G, it was just a matter of speed. 5G is a fundamental different proposition,” explains Kelly.

Indeed, 5G has been branded as the most revolutionary technology of the year, which is why the challenges Huawei has been facing don’t come as a surprise.

“We [Huawei] are by all estimations 18 to 24 months ahead of everyone else, which is probably why there are so many challenges to Huawei implementing the technology. Just imagine that if Europe weren’t allowed to use Huawei for 5G, they would have to pay an additional $62 billion to build it themselves.”

So far, Huawei has signed more than 50 commercial contracts for 5G, 28 of which in Europe and many others in the Middle East.

Nonetheless, Kelly believes there is still a long way to go before 5G becomes a reality for everyone.

“We are very much at the beginning of 5G. It’s going to take a lot of time for the carriers to build the networks, and then for them to find reasons for you to upgrade to a phone with a 5G chipset installed,” says Kelly.

“5G is coming, and it’s already there for some people. In a year and two from now it will become the norm.”