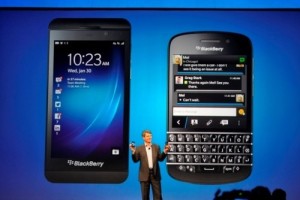 The clock is winding down on BlackBerry’s days as a mobile OS or mobile device maker. BlackBerry divulged its quarterly earnings figures last month, and it’s not a pretty picture: BlackBerry the company will survive, but it’s time to throw in the towel on BlackBerry the mobile platform vendor.

Do those figures assure that the end is nigh for BlackBerry as a company? Not necessarily, but this should have been BlackBerry’s biggest quarter in years. This was supposed to be its moment to shine. It was BlackBerry’s last best chance to demonstrate that after all the setbacks and delays, BlackBerry 10 was worth the wait, and that the company is back and ready to go head-to-head with iOS, Android, and Windows Phone.

BlackBerry didn’t even meet conservative Wall Street expectations, in a quarter that included the launch of the BlackBerry Z10 and BlackBerry Q10. This is the pinnacle. Demand for BlackBerry devices will never be any higher, and the fight for market share will not get any easier. So, yes – the future looks very bleak for BlackBerry as a mobile platform.

BlackBerry who?
I recently spent a few weeks using a BlackBerry Z10 in place of my iPhone 5. It is an OK device in terms of hardware. I like its size, and it’s better than the massive Nokia Lumia 928 or the gargantuan Samsung Galaxy S4. The BB10 OS was OK as well. It has some cool and unique features, but it lacks most of the apps I use frequently and have come to rely on.

The bottom line for BB10 and BB10 smartphones is that “OK” is not good enough. Evaluated from a consumer market perspective, BlackBerry 10 was DOA. “OK” means that users at companies that still mandate the use of BlackBerry devices finally have smartphones that are at least from the same era as rivals running the iOS, Android, and Windows Phone operating systems. But once BlackBerry customers held hostage by their existing investments in the BlackBerry ecosystem escape, almost no one will buy a BlackBerry by choice.

I’ve said negative things about BlackBerry’s fate before, and some readers replied with comments declaring BB10 to be the best mobile OS ever, and that they and everyone they knew immediately traded in their iPhones and Android smartphones to switch to the BlackBerry Z10. But I haven’t seen any evidence of that happening. Anywhere. Ever.

I then asked my Facebook, Google+, and Twitter contacts – a combined audience of about 35,000 (plus whatever extended audience might have seen the question after the fact) – if they or anyone they knew had intentionally switched from another platform to a BB10 smartphone without their employer holding a gun to their head. Crickets. Not a single person responded to say they had even heard of such a thing.

The only reason BlackBerry’s quarter was as good as it was is the pent-up demand from customers who are locked into BlackBerry. Beyond that, there is no demand, and it will get only worse from here.

Meet BlackBerry: The MDM company
I sounded the death of BlackBerry as a mobile platform or device manufacturer more than a year ago, predicting that BlackBerry Mobile Fusion would be the future for BlackBerry. I still think the company can emerge from its ashes and re-establish itself as a mobile device management (MDM) company.

It seems BlackBerry CEO Thorsten Heins is beginning to see things that way, too. He devoted much of the earnings call to spinning the quarterly results. Heins’ message was essentially, “Don’t pay attention to the dismal smartphone sales and revenue figures, just look at the silver lining: BlackBerry isn’t just a device company – it can live on as an enterprise mobility company.”

The ship has sailed on BlackBerry as a mobile platform, and BlackBerry smartphones and tablets are not long for this world. But many companies remain entrenched in the BlackBerry ecosystem. They love BBM. They appreciate the security and the control BlackBerry provides. By extending the features and capabilities that customers love most about BlackBerry to iOS and Android, BlackBerry enables its customers to incorporate or transition to other platforms without losing the BlackBerry mobile management tools they value so highly.

BlackBerry invented mobile device management before there was an MDM market. It makes sense for BlackBerry to surrender the mobile platform and device market, and assert its role as the dominant MDM player.