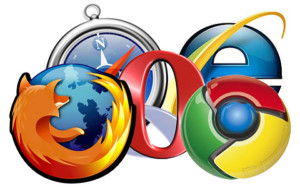 Google has unseated rival Microsoft as the leading browser maker in the U.S. for the first time, Adobe said this week, citing data from its analytics platform.

The rise in Google’s domestic fortunes followed Microsoft’s reduction to second fiddle worldwide in May 2013.

According to the Adobe Digital Index (ADI), a measurement of browser usage based on tracking visits to the average U.S. website, Google’s desktop and mobile browsers – Chrome on both platforms, the aging Android browser on the latter only – slipped past Microsoft’s Internet Explorer (IE), which retained its premier position on the desktop but had little to show for its effort on smartphones.

The U.S. browser war reached a milestone in April as Google replaced Microsoft as the No. 1 maker of Web browsers, said Adobe.

For April, Google accounted for 31.8% of all browser usage in the United States. Meanwhile, Microsoft owned a 30.9% share.

Apple’s Safari was in third place with a combined desktop and mobile share of 25%, while Mozilla’s Firefox was a distant fourth with 8.7%.

The rise of Google’s browsers, and to a lesser extent Apple’s Safari, and the corresponding declines of both IE and Firefox, can be attributed to mobile browsing, primarily that conducted on smartphones. “Today, mobile [operating systems are] more important, giving Google and Apple a leg up with default status on Android and iOS,” said ADI analyst Tyler White.

Adobe tallied visits, which in analytics parlance is synonymous with a session on a website, a period during which a user may view numerous pages before leaving, or before a time limit of inactivity expires. Adobe thus actually measures a type of “usage share,” or how active users of each browser are on the Web.

Other analytic firms count differently. California-based Net Applications uses visitors, an expression of the number of unique individuals – actually their browsers, as the tracking is done with cookies – to measure “user share,” which is analogous to the number of copies of each browser in use during a specific period.

Because Adobe drew its data only from consumer-facing sites – some 10,000 of them during April – it was little surprise that the Chrome/Android browsers outpaced IE. Microsoft’s browser has a lock in businesses, where it’s often mandated as the only allowed desktop browser, but it has a less-dedicated – some would say less-coerced – base among consumers. On mobile, IE accounted for just 1.8% of usage.

Google’s climb to the top spot in the U.S. followed its push into that place globally by almost a year: Adobe’s data had Google’s Chrome/Android passing Microsoft’s IE in May 2013 worldwide. “Outside the U.S., Google’s browser share has grown even more rapidly,” an Adobe spokesman said in an email Friday.

Adobe’s take on the desktop versus mobile contest was in line with other, earlier calculations by Net Applications, in that while IE’s strength was its desktop browser, the rise in mobile browsing caused its overall share to drop six percentage points in the last year. Meanwhile, Chrome/Android and Safari benefited from their primary positions in mobile on Android and iOS, respectively, the two most-used mobile operating systems on the planet.

Mozilla, Adobe said, was in the weakest position of the big four because of its lack of a viable mobile strategy. In the last two years, Mozilla has lost a steady drip of Firefox desktop users and been hit by the increasing importance of mobile browsing, with its total usage share falling from nearly 20% to its now sub-9%.

Although Net Applications’ numbers are global and not U.S. specific – the company does not publicly release the latter – the trends shown by its data are similar to Adobe’s, but not identical.

By Net Applications’ reckoning, Microsoft remained the top browser maker worldwide in May 2014 with a desktop + mobile user share of 48%, more than double that of runner-up Google and its 21%. Apple and Mozilla continued to battle for third place, with the former making strides in its move to pass the latter. In May, Firefox accounted for 13.8%, Safari for 13.4%. Safari cut the April gap between it and Firefox by more than half in May, and may become No. 3 as early as this month.

Firefox’s decline could not come at a worse time. Mozilla’s contract with Google for making the latter’s search engine the default on Firefox comes up for renewal in November. According to Net Applications, Firefox had a combined desktop + mobile user share of 21.1% three years ago when it negotiated the current contract, which paid Mozilla approximately $300 million annually, nearly all of its revenue.

Going into this year’s tte- -tte with Google, Mozilla will be bargaining from a much weaker position, down 35% in total share since 2011.

Net Applications had mobile gaining more ground at the expense of desktop browsing in May. By the end of the month, mobile browsing had jumped to 18% of all browsing worldwide. At the current pace, mobile should reach the 20% milestone in October, and account for more than a quarter of all browsing by this time next year.

Mozilla again lost desktop + mobile user share in May. Apple’s Safari could replace Firefox as the No. 3 browser this month if past trends continue.