Estonia is an unlikely candidate for the world’s most tech-savvy nation. With a population of 1.3 million, the Baltic state began its digital journey over two decades ago and has established a platform where all government services are digitally processed. Siim Sikkut, the CIO of the government of Estonia, tells CNME how the GCC can follow Estonia’s example. 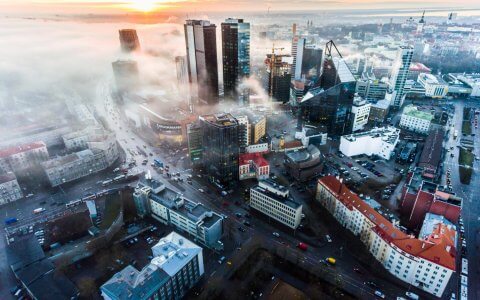 e-Estonia, in the making since 1997, has transformed the nation into a digital republic. After experimenting with various strategies, and gradually gaining the trust of its people, the country has achieved what other countries can only dream of.

The success of e-Estonia is already visible. Estonia has deployed blockchain technology into its documentation process, allowed driverless technology to be easily tested and implemented, while all necessary services including voting, healthcare, and even the country’s justice system are all digitised.

Siim Sikkut has been the Estonian government’s CIO since March 2017, and previously worked as a digital policy adviser to the government for five years, where he was one of the founders of the e-residency programme and helped to author the Estonian Digital Agenda 2020. Sikkut was in Dubai recently speaking at MIT Technology Review’s EmTech MENA conference, and told Joseph George how the success of e-Estonia has been possible.

How did the Estonian government embark on this digital transformation?

The journey was part of a conscious decision that our leadership took almost two decades ago. Our people wanted welfare benefits and our government wanted to keep taxes low. Achieving both with limited resources was a challenge. That’s when the government decided to experiment with ways to limit expenses. The internet was still taking off in the nineties.

Our leadership developed a strategy and responded politically and administratively, steering it with a top-down approach. It requires a great level of commitment to plan things, implement them and ensure that results are delivered. We need to realise that transformation is not so much about technology, but about changing people’s lives.

How did the government manage initial public concern about these changes?

Two key natural concerns were about the issue of privacy and security. We had to make sure that we had credible security and proper safeguards in order to secure the system. There was also an initial resistance to change. Handling this was crucial.

Fundamental to the project’s success was our ability to provide solutions to existing problems, reassurances to the public and installing proper legislation.

We created different ways to make sure that concerns around security and data could be alleviated. It was important that people had access to their data but could also monitor who all had accessed it. For example, every citizen can log in and find out who last viewed their health record. These small measures go a long way in creating trust.

Legislation plays a key role, especially in Estonia where there is a strong rule of law. We built up very strong data protection legislation. We created features within our legislation where people had the right to know.

Again, that’s where the leadership plays a crucial role. There was a willingness to try out new things, even with issues that hadn’t been tried out before such as online voting. People around the world said we were crazy. It was the same when we went live with the offer of e-residency in 2014.  Nobody had done this, but our government tried it out and today it is an active programme.  Our willingness to experiment and take risks has been a key part of our success.

How did you ensure you met targets and timelines?

When we started off there was no digital data available, and data is crucial. The country did not have deep internet penetration and very few people had internet access. We started off by laying the fundamentals. We installed a system where users only had to input data once.

We then built up shared platforms where all departments and all stakeholders, including the wider society, could use.

The X-Road project – a secure data exchange  – was a result of this initiative. It links individual servers through end-to-end encrypted pathways. Today, residents, public institutions, and private companies use it by authenticating their e-ID. Privacy is of utmost importance, and while it allows access to authorised users, it lives locally. All other initiatives, such as e-governance, e-tax, I-voting, e-Health and e-Residency are based on this platform.

How have these changes benefited the government and citizens?

These digital platforms have played a major role in the development of other programmes. These are the building blocks for innovative strategies. That is where we have succeeded in making all our efforts easier, faster and cheaper.

Today, citizens can do almost anything online when dealing with the government, except for getting married and selling real estate. Digital has become a natural feature of our daily life.

We don’t have aggregate numbers to pinpoint the cost benefits. However, there are key indicators from every sector. Our tax administration is effective. There are no hospital queues. We have invested about 1-1.2% of our state budget into technological integration.

How have you mitigate risks against these wholesale technological changes?

Technology can always fail. The dangers are real. Something can crash and we can have availability issues. In 2007, Estonia was the first country to be attacked on a large scale. There was a series of service attacks that ensured that the websites were not available. But we never went down. On an hourly basis, we experience attempted cyber-attacks.  Our cybersecurity systems and frameworks were designed with threats in mind.

We work closely with the private sector, as most of our critical services involve other providers, like banks, telcos and utilities etc. If you manage the risks well, the benefits exceed costs.

Risks will always be there, but we can manage them. There are many people who thought we were  crazy to introduce this system. We’ve created multiple options for voters to ensure that they vote according to their free will. A voter has a choice of either vote online or go to the booth at the last minute. In order to ensure that the voter is not coerced, we allowed the voter to re-vote online.

What we cannot solve technologically, we can solve procedurally. There are several other countries that are exploring the possibility of e-voting. It’s an area where we cannot accept any risks.

Can larger countries do what Estonia has done?

The size of a country is an important factor. We just have less people to convince. It also depends on the complexity of governance, especially in a democratic setting.

We have to make decisions to fasten the process. We were lucky. As a small place, we could take decisions faster. But it also depends on government decision-making. We had to help people, especially those who were not online.  We also have done a lot of work internationally, in terms of building alliances where we can help each other in critical times.

Experimentation is what I see as the way forward for other countries. I know it is easier said than done, but that’s the challenge. In Estonia, we are confident that we can manage risks at an acceptable level. It is important to have a credible rule of law for technology to be implemented. Legal constraints and effective implementation are key for this to succeed. People need to have trust. Without these elements, it is unimaginable.

Which emerging technologies will have the biggest impact on society?

Artificial intelligence makes perfect sense for us as we are always short of people. The more we can automate and rely on machines, we can free our resources to do better things. We were one of the first in the world to adopt Blockchain back in the day. We use it for very specific purposes, especially for data integrity to ensure that the most fundamental data like health records do not get violated or tampered with without proper authorisation.

With AI, the fear of joblessness is real. Existing technologies can put people out of jobs. There is a lot of thought that needs to go into reskilling the population based on future demand. It’s something I hope governments are thinking seriously about. We cannot live in a two-tier society. It has to be sustainable.