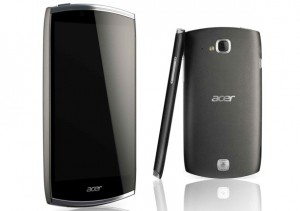 Mobile World Congress doesn’t start until the end of month, but it appears some phone makers aren’t very patient. According to phone blog Pocket-lint, Acer has leaked some details on its latest handset, the Acer CloudMobile.

The Acer CloudMobile has just won the iF design award 2012, in recognition of outstanding achievement in design–so it’s no wonder that Acer wanted to share the news weeks before the global mobile event goes down.

Acer hasn’t released any major details, but the CloudMobile will reportedly sport a 4.3-inch HD display, feature Dolby sound, and be less than 10mm thick. It’s also expected to run Android 4.0 (Ice Cream Sandwich) when it launches, which will be in Q3 of 2012.

As you can see from the photo, the CloudMobile lacks physical buttons on the front, which suggests it will indeed be an Ice Cream Sandwich phone. Acer says that the CloudMobile will be the first smartphone to integrate with AcerCloud technology (hence the name, “CloudMobile”), which is Acer’s new cloud service that offers “unlimited” web-based storage. AcerCloud also integrates with new Acer-branded PCs.