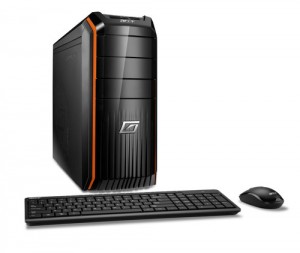 Acer’s new desktops have quad-core Core i5 and i7 processors, which are among the new Ivy Bridge chips Intel also announced yesterday. Acer will also introduce laptops and ultrabooks with new Core processors in the coming weeks and months, according to a company spokeswoman.

Intel CEO Paul Otellini last week said that the first Ivy Bridge chips will be quad-core processors for high-end systems. He also said that chips for mainstream laptops and desktops will come later this year, ahead of the back-to-school season, which starts around the middle of the year. Acer already introduced Aspire S5 ultrabook earlier this year with Ivy Bridge chips, saying the new processors offer much better performance while preserving battery life.

Acer’s new desktops are priced between US$699.99 and $1,199.99, and targeted at mid- to high-end users such as gamers. The systems will provide a throughput improvement with on-chip support for PCI-Express 3.0, and graphics improvement with support for DirectX 11, which should boost the gaming experience.

The Acer Predator AG3620 desktop is targeted at power users and includes third-generation Core i7-3770 processors running at a speed of 3.4GHz. The desktop supports up to 16GB of memory and 2TB of storage space, and is priced starting $1,199.99. The desktop has eight USB 2.0 ports, two USB 3.0 ports, an HDMI port, Wi-Fi and an Ethernet port.

The desktops are now available in the U.S. A company spokeswoman could not immediately provide information on worldwide availability.