CEO Tim Cook and other top Apple executives last night unveiled a larger tablet dubbed the iPad Pro, a revamped Apple TV and near the tail of a two-hour-long event, new iPhones.

At a much bigger venue than in the past – San Francisco’s 100-year-old Bill Graham Civic Auditorium, a hall where the Apple II debuted in 1977 – Apple kicked off what Cook called a “monster roll-out.”

For his fifth iPhone introduction since taking the reins from co-founder Steve Jobs in 2011, Cook kept to tradition by opening the event and then introducing other Apple executives, including COO Jeff Williams, marketing chief Philip Schiller and Eddy Cue, who leads the Internet software and services group, to carry much of the load.

But Cook started by strutting not the latest models of his company’s biggest money maker, but the newest iPad in the five-year-old tablet line. “We asked ourselves: How can we take iPad even further?” Cook asked, then answered with, “We have the biggest news in iPad since the iPad.”

He then handed off the larger-screen iPad Pro to Schiller, who trumpeted the specifications. “[It’s] the biggest we’ve ever built in an iOS device,” said Schiller of the 12.9-in. display, hitting the screen size mark rumoured over the last few weeks. He also touted the full-sized, on-screen keyboard and new iOS 9 features that will support larger displays, like split-screen, even as he asserted several times that it’s better than a traditional notebook. 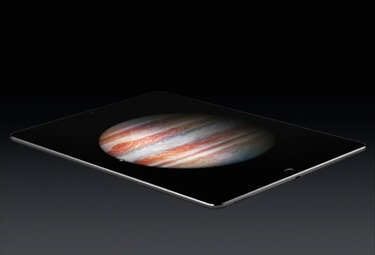 The iPad Pro will be powered by the new Apple-designed A9X SoC (system-on-a-chip) that includes a 64-bit processor Schiller claimed is faster than 80% of the mobile PCs that shipped in the past year. The Pro weighs in at 1.6-lbs., just slightly heavier than the 2010 original.

And as several analysts bet earlier this week, Schiller also unveiled a keyboard and stylus — dubbed Smart Keyboard and Apple Pencil, respectively – that effectively “Surface-izes” the bigger iPad, making it a rival for the current benchmark, Microsoft’s Surface Pro.

Some analysts dampened the comparison between the two, even as Microsoft enthusiasts knocked Apple for following, not leading.

For Dawson and others, the starting positions of the two devices made all the difference: The iPad Pro originated from a pure tablet, one that ran a mobile-centric OS, while the Surface Pro was quickly positioned by Microsoft as a full notebook that just happened to have a tablet foundation, and was powered by a desktop operating system.

“Apple isn’t trying to create one device to rule them all,” Dawson said.

The keyboard, which draws power from the iPad, connects to the side of the tablet, and showed Chiclet-like keys with less travel than a standard notebook keyboard. Both factors are admittedly similar to the Surface Pro’s Type Cover.

Other experts weighed on different aspects of the iPad Pro. “A lot of people were assuming that this was going to be an enterprise device, but Apple spent all of its time talking about creativity,” said Van Baker of Gartner.

The one exception, and in itself an unusual turn: Schiller introduced Microsoft’s Kirk Koenigsbauer, who leads the Office team, to demonstrate Office on the iPad Pro. Reactions to Koenigsbauer’s appearance was mixed. While he got a scattered round of applause from the audience after a few ticks of silence, those on Twitter were more direct.

“The new Microsoft. Promote a product that is a direct rip-off of what you did years ago,” tweeted Paul Thurrott, a long-time Microsoft watcher and blogger, referring to the Surface Pro.

“Microsoft needs train of thought on optimizing its applications for all competing platforms, mobile or not. Good to see them up there,” countered Ryan Reith, IDC analyst, also on Twitter. 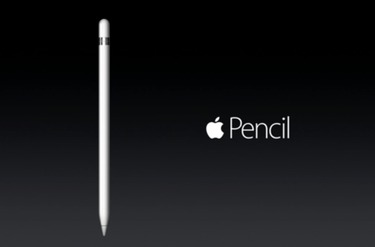 The iPad Pro, Apple Pencil and Smart Keyboard will go on sale in November, according to Schiller – a much longer delay between announcement and availability than the Apple norm — with the tablet starting at $799 for a model with 32GB of storage space, the same price as the lowest-end Surface Pro 3, although Microsoft’s tablet comes with 64GB of storage. Other iPad Pro models will run $949 (128GB) and $1,079 (128GB with wireless connectivity). The stylus and keyboard will cost $99 and $169, respectively.

An entry-level iPad Pro with the Smart Keyboard – like Microsoft, Apple is not bundling the two – will thus run $968, or nearly as much as a 13-in. Retina-less MacBook Air, which also boasts 128GB of SSD (solid-state drive) storage. 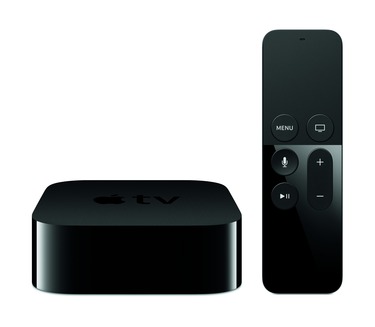 Returning to the stage, Cook walked the audience through the revamping of the Apple TV, a business that the company has formerly called just a “hobby.”

“I’d like to talk about an even larger screen, and that’s your TV,” said Cook at the start of the segment. “The future of TV is apps,” he argued, adding, “We believe it is the future of television.”

The Apple TV features a redesigned user interface (UI) and a new remote that allows both touch — with the glass surface built into upper section of the device – and voice, via Siri, Apple’s digital assistant technology long available in the iPhone, at a press of a button.

Its new operating system, which Cue called tvOS – apparently Apple’s new nomenclature is to drop a lowercase description in front of “OS,” as in “watchOS” for the Apple Watch – is “based on iOS, and built for the living room.”