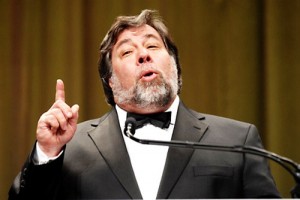 Apple co-founder Steve Wozniak has said that he is confident that Apple will launch new products that will “surprise and shock us all,” and help boost the company’s “disappointing” share price higher than the 16-month low it fell to last week.

“Apple’s stock is a little low right now,” Wozniak said at the Login technology conference on Friday. “Over time I’ve seen Apple go up or down 2x over a few months. It’s very disappointing because if you look at the amount of cash that translates to one to two hundred dollars per share of stock just in cash form. So the expectations are a little lower even than they expect.”

“But where are the profits of the whole industry though?” Wozniak continued. “They are still with Apple and profits are all that really matter in the long run. Apple’s business model tends to be new products, even products that didn’t exist before and doing well out of them and not re-making the same thing, as eventually it just gets a little bit stale. So I would guess that Apple is very well prepared, and working on new things that are going to surprise and shock us all. And I honestly don’t know [what].”

Also during his talk, Wozniak also said that he expects the future will see computers that can think for us. “Computers should save us from a lot of thinking, like calculating numbers,” he said. “When electronic calculators came about they freed our minds to think of other things and enables us to get where we are today.”

Eventually, computers will be able to deliver us “to a place of perfect happiness,” Wozniak predicted, adding that voice recognition will become more popular and powerful in the future.

“The iPhone 5 is one of the hottest products today,” Wozniak said, reminiscing about his time working with Steve Jobs. “Back then, the HP35 hand-held calculator was the iPhone 5 of its day.”

“I gave up trying to guess a long time ago,” said Wozniak when talking about what the future may hold for Apple. “There can be rumours which are false, or something gets cancelled. I never ask key insiders at Apple what they are about to come out with.”

Wozniak said he hopes that, one day, he’ll be able to buy a robot that can clean his car at night in the garage.