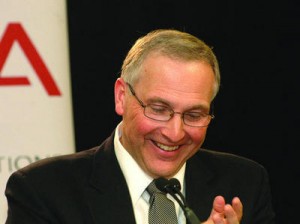 Despite what he sees as shortcomings of Microsoft’s real-time communications platform, Lync, businesses will see value to some of its features, and supplement those with products from Avaya, says Avaya CEO Kevin Kennedy.

Nevertheless customers faced with using Lync Server for some of its features such as instant messaging may deploy other features such as voice calling in certain circumstances, directly competing with Avaya products, Kennedy says. This despite Avaya’s 50 percent lower consumption of network bandwidth, he says.

“The real reality is customers and employees will decide what tools they want to use, and it won’t be just one tool,” he says. “I actually think in many cases with many customers we will end up being a complement to Microsoft and Lync.”

It’s not just Microsoft that Avaya expects to share customers with, and with that in mind Avaya is embracing open standards for its UC products, “because we believe all of the answers are unlikely to come from any one company. If you want an application that can distribute an SMS to every device that you own versus just one, well a company may want that and a company may get that from someone else other than Avaya – Microsoft, Cisco.”

Those two competitors have deep pockets that enable them to enter markets for the long-haul and ramp up sales slowly, he acknowledges, but Avaya can hang with them. “I think being one of three is a great thing,” Kennedy says. “In some sense that’s organising for an industry, and as I further stated I think it will not be a single-vendor or a single-application, winner-take-all type of environment. As long as we continue to innovate and offer a proposition that is fundamentally different there will be a healthy place for us.”

Kennedy’s comments came during an interview with Network World at Enterprise Connect 2013 last week. At the conference, analyst Peter Hale of MTZ Ltd. said Avaya had lost market share in IP telephony to Cisco between 2011 and 2012, winding up with 12 percent to Cisco’s 18 percent.

That in part was due to paying more attention to large customers and losing smaller businesses customers, Kennedy says. “After we did the Nortel acquisition (2009), on both the contact centre and the unified communications side our low-end and mid-market offerings became stale, and we were more focused on the high end.”

But with the advent of a new single-server phone system, IP Office, Avaya has started to come back. “The good news is we’re on a new product cycle, and [IP Office] that is so competitive is one of the reasons that we’re winning again.”

Kennedy says that Avaya’s recently restructured debt should keep the company clear of a cash crunch through 2017 at the earliest and enable it to continue updating its products.

The company owes $6.075 billion in long-term debt and scored an $85 million net loss during the last three months of 2012, according to the company’s latest 10-Q report to the Security and Exchange Commission.

He says that despite the stark terms of the refinancing, customers shouldn’t worry about its effects on actual products. “I would argue that through public information it is very clear that debt restructuring does not translate to an issue in product continuity. In fact it’s quite the opposite because that’s the only value to be protected,” he says. “That being said, gross margin, the ability to service debt has improved over the last five years.”

The company filed last June to sell public stock in the company but that initial public offering has stalled. He says he expected to seek an IPO in 2013, but the owners of the company, Silver Lake and TPG Capital, wanted to file earlier. “I think we filed in June and by August it had become a very dubious market and it was not optimum for us to go out,” he says. “Again, owners will make those decisions. They’re very clear for me to stay focused on improving the products, and that’s what I do.”

Meanwhile Avaya is benefitting from its 2009 purchase of Nortel’s enterprise network infrastructure gear and its customers, he says. “We’re taking over the management of their infrastructure directly. That’s a recurring revenue stream that becomes new to us as we take those contracts,” he says.

That infrastructure in combination with Avaya voice gear gives customers resources to debug networks that other vendors can’t match, he says. Customers who have Nortel equipment and choose to upgrade to the next generation choose Avaya to manage the transition.

He says Avaya supports BYOD programs with its Flare collaboration/presence/email/voice client and one-X mobile voice client or iPhones and Android devices. In addition, the company activates two softphones on PCs for every phone handset it sells, a dramatic change from four or five years ago when most sales were for hard phones.

Avaya’s Identity Engines portfolio also helps BYOD programs by setting aside virtual LANs for certain categories of users and making it easy for personally owned devices to access limited portions of corporate networks. “My real point is BYOD is not just a video or a unified communications client story it is also married into the ease with which we can help people do BYOD as an overlay into your networking environment,” Kennedy says.