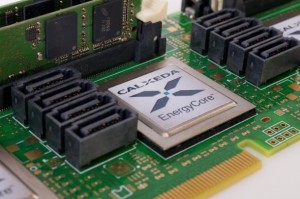 Chip maker Calxeda has received an investment to the tune of US$55 million to develop low-power server chips with ARM processors, the company is expected to announce today.

Calxeda makes a chip called EnergyCore with a low-power ARM processor, which is used in experimental servers from HP and Dell. There is a growing interest in ARM servers as an energy-efficient way to process high volumes of online transactions and provide a faster response to search and social network requests.

The Calxeda chip is also commercially available being used in a server called Viridis from Boston Ltd. The server has up to 48 Calxeda chips — or 192 ARM cores in a 2U enclosure — and integrated networking and storage units. Each Calxeda chip consumes as little as 5 watts.

ARM processors are mainly found in smartphones and tablets, but some analysts believe a congregation of mobile chips could be a power-efficient alternative to x86 server chips from Intel and Advanced Micro Devices, which are used in most servers today. Some low-power Intel Atom chips are already being used in servers, and Intel is also launching a new line of low-power x86 Atom S-series server chips later this year to further tackle the ARM threat.

The current Calxeda chip is based on the Cortex-A9 ARM processor design. More products and partnerships will come in the future, a company spokeswoman said in an e-mail.

The privately held Calxeda now has attracted investments to the tune of $100 million since the company was founded more than four years ago. The company has more than 100 employees working in the U.S. and Asia.

ARM servers could make their presence felt in data centres starting in 2014. HP and Dell are offering ARM servers for testing purposes in their laboratories so customers can benchmark and get a first-hand look at the servers.

The ARM processors are currently only 32-bit, though the chip designer has announced the 64-bit ARMv8 architecture. Test servers with the new 64-bit architecture are expected to come out either late this year or early next year. A lot of software developers are writing for the x86 architecture, and ARM hopes to attract more developers as more ARM servers become available.