Ride-hailing applications in Saudi Arabia are recruiting female drivers, after the Kingdom announced plans to lift the ban on women driving by June 2018, CNN reported.

Female customers currently represent 80% of Uber’s Saudi rider base and 70% of business for its Dubai-based counterpart, Careem, according to statistics shared with CNN by both companies. 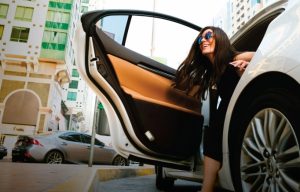 Currently, all drivers employed by the two firms are male — mostly Saudi nationals driving their privately-owned vehicles.
Following the ground-breaking royal decree that announced plans to lift the ban on women driving last September, however, both companies have been preparing to hire their first female drivers.

After the decree was issued, the company launched a series of 90-minute training sessions, in the Saudi cities of Riyadh, Jeddah and Al Khobar, targeting Saudi women who have already acquired valid driving licenses while abroad.

Careem — which operates in 13 countries across the Middle East, North Africa, and Pakistan — has launched a series of 90-minute-long training sessions in Saudi, targeting Saudi women who have already obtained valid driving licenses from abroad.
Taught by existing female Saudi employees of Careem (working in administration roles, not as drivers), the sessions educate attendees about Saudi road laws, customer service techniques, and how to use the application’s platform.
“From the first moment, we announced our willingness to welcome the ladies to work on our platform,” says Abdullah Elyas, co-founder and chief privacy officer at Careem, over email to CNN.
Careem has already received thousands of applications from Saudi women interested in becoming drivers, Elyas says. Those who complete the training sessions receive a certificate which acts as a guarantee that they have officially joined Careem’s team, bar any changes to Saudi traffic laws, says Careem’s public relations manager, Murtadha Alalawi.
Uber, meanwhile, has announced plans to open “one-stop-shop” facilities dedicated to recruiting future female drivers, or “partners”, as the company calls them. These Green Light Hubs already exist in the country to serve male employees.
“We will partner up with necessary stakeholders to facilitate the paperwork, training access, and access to vehicles, including access to driving schools run by third party partners,” says Zeid Hreish, Uber’s general manager in Saudi Arabia.