Jacob spoke to CNME Editor Mark Forker to explain why Dubai is the perfect location for them to expand its footprint in the Middle East, the role he feels AI will play in the future development of blockchain technology and the impact its Ethereum blockchain is having in the financial sector.

INVAO is a global blockchain company that has a global footprint with operations in Dubai, Berlin, and Lichtenstein. Can you give us a brief overview of how the company was established, the success it has enjoyed thus far, and what its vision and mission statement is?

INVAO was founded by Frank Wagner and Frank Gessner; two serial entrepreneurs from Germany who have had great success with internet-based businesses since the early 1990s. When they first learned about blockchain technology, they realized its disruptive potential. Having learned their lessons during the early days of the internet, they understood blockchain has enormous potential, but it is still too early in the growth cycle to know which projects will create a breakthrough solution.

That’s when the idea of INVAO was born: A blockchain investment management firm that invests in a diversified portfolio of blockchain assets. The goal is to enable investors to participate in the growth potential of blockchain as an asset class. We manage these investments on behalf of our investors, to guaranty maximum returns while actively managing the investment risk. Our track record shows what’s possible: In H1 2019 our IVO – Blockchain Diversified Bond has generated a return of 108 percent and has outperformed both Bitcoin and its benchmark index, the CCI30.

The blockchain leader has recently expanded its operations to the Middle East, and has selected Dubai for its regional HQ. The Dubai leadership has adopted a very progressive approach to blockchain technology, and recognizes the value of the disruptive new technology. However, was it this mindset that encouraged you to choose Dubai as your MENA location, or where there other factors at play?

The progressive mindset of Dubai’s leadership was definitely a major reason for our expansion into the UAE. Initiatives like the Emirates Blockchain Strategy 2021 prove that the UAE understands the potential of the technology and is actively driving its development. Apart from the government’s efforts, we also noticed great interest from Dubai-based private investors. In Q1 2019, the UAE has seen the largest token sales volumes worldwide. The country has emerged as a global blockchain hub, and we believe this development will accelerate further in the future.

AI is fueling change not only here in the Middle East, but on a global scale. In 2020, we’re expecting to see more and more AI use-cases becoming adopted in the mainstream. What role can AI play in terms of advancing blockchain technology and can you disclose more information on AI Arbitrage trading opportunities?

Both AI and blockchain are core technologies of the 4th industrial revolution. There is a wide range of use cases where both technologies can interact. AI needs vast amounts of data to function. Much of these data is private data, which users are reluctant to share with corporations – think for example about health records. Smart healthcare systems use AI to make accurate diagnoses based on medical records and scans. If this data were stored on a blockchain, users could have full control over who they share their data with. AI-based blockchain asset trading is another use case. At INVAO we run an AI-based high-frequency trading machine. The AI-module identifies arbitrage opportunities across different exchanges, and the high-frequency trading machines then executes buy and sell orders. For instance, if Bitcoin trades at a lower price on exchange A than on exchange B, we buy Bitcoin on exchange A and immediately sell it on exchange B. The difference in price is our arbitrage gain. As these price differences only appear in a tiny time window, this sort of trading can only be done via computerized trading engines.

Can you expand on the significance of INVAO issuing the world’s first-ever full- fledged bond on the Ethereum blockchain?

Tokenized securities have a range of advantages compared to traditional paper-based securities. They are more cost-effective, more transparent, and more convenient investment vehicles. There have been some blockchain-based bonds before, but they were either issued on private blockchains or a hybrid form of a tokenized and traditional investment. Being completely digital, the IVO – Blockchain Diversified Bond sets and entirely new standard for tokenized investments.

Can you outline to us what your primary objectives and goals are for 2020? 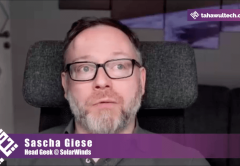