Dubai, United Arab Emirates, March 7, 2021: Today Dataiku, the world’s most advanced Enterprise AI platform, was named a Leader in the Gartner 2021 Magic Quadrant for Data Science and Machine-Learning Platforms, marking its second consecutive year in the Leaders quadrant. Dataiku believes the placement amid the fast-moving market for AI tools cements its position as the driving force behind breakthroughs in Enterprise AI at organisations across the globe. 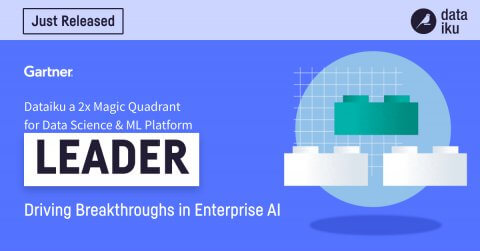 Since its founding in 2013, Dataiku has continuously delivered on its vision to connect thousands of people across an organisation, unifying each company’s approach to and ability to execute on data science, machine learning, and AI projects at scale.

In 2020 as Enterprise AI maturity became table stakes for survival, Dataiku customers already had the right building blocks in place. Dataiku’s centralised, controlled, and elastic environment fuels exponential growth in the amount of data, the number of AI projects, and the number of people contributing to such projects, and was built to scale as businesses strive to go from a handful of models in production to hundreds (or thousands). With hundreds of people and multiple teams across the business armed with the tools to make better decisions using data, agility to weather change was within reach.

Dataiku released two major updates (versions 7 and 8) in 2020, packed with features to continue to expand the footprint of AI across the business via data scientists, analysts, and data leaders alike. In August 2020, Dataiku also announced a $100 million Series D funding round to support its momentum as a company, and the worldwide acceleration in Enterprise AI efforts.

“Dataiku has always been a trailblazer in this market — our platform was built from the ground up for everyone in an organisation, and we have always been an end-to-end solution that offers a full spectrum of features from data ingestion to production, monitoring, and governance”, said Florian Douetteau, Dataiku CEO. “We’re proud to be recognised as a Leader in the Garner 2021 Magic Quadrant for Data Science and Machine-Learning Platforms for the second consecutive year. We see it as continued affirmation of the technology we’ve built, the principles we stand for, and the value for customers in our approach to Enterprise AI transformation”.