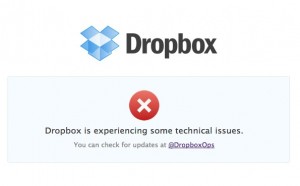 The weekend saw Dropbox users frustrated by issues with syncing and uploading files, as well as creating shareable links. The issues became so severe that the stability of Amazon Web Services (AWS) was called into question.

According to a series of updates from the @DropboxOps Twitter account, problems began at around 11pm GMT on Thursday. At that time, the company said that the issue would be resolved within an hour, but the last update, posted at around 3am on Friday, stated that problems were ongoing.

“You should be able to create shareable links again. Our engineers are actively working to resolve remaining issues as quickly as possible,” the company tweeted.

Some Dropbox users took to Twitter to vent their frustrations, post pictures and question whether AWS was to blame. All files uploaded to Dropbox are encrypted and stored on Amazon’s Simple Storage Service (S3).

“Is @Dropbox down for anyone else? AWS having a wobble? Been like it for half hour now. Weird,” tweeted Ian Bradshaw, a UK-based software engineer.

“@Dropbox up & down tonight. #AWS problems again? I’ve given up on flying cars for the short term, but the cloud too?!? :-(,” added Oracle software engineer Mark Heckler.

The issues could be linked to elevated error rates in Amazon’s Route 53 Domain Name System (DNS) web service on Thursday. Acording to AWS’s health status page, Route 53 experienced increased error rates between 4am and 6am GMT on Friday.

Last year, AWS had to apologise after a software bug led to a backlog on the system and brought down Netflix and some other sites for a number of hours. Some analysts have suggested that continual service disruptions from Amazon could make customers look at other providers.

Consumer file-sharing and synchronisation apps like Dropbox have become popular with business users, because they make it easy to sync files between computers, tablets and smartphones. However, many of these apps lack the security, centralised administration and management of enterprise solutions, causing headaches for IT departments.

Last year, Dropbox suffered a setback in its efforts to move into the enterprise more forcefully after being hit by a spam attack that stemmed from the breach of an employee’s account.