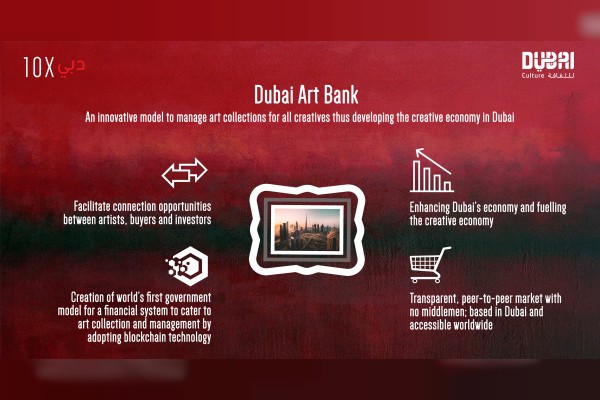 According to Dubai Culture, the platform is the first of its kind in the world and it uses cryptocurrency to facilitate trading in artworks. The government entity also noted that it will be instrumental in establishing the emirate as a global centre for the arts.

The platform is part of the Dubai 10X initiative, which is being led by Sheikh Hamdan bin Mohammed bin Rashid Al Maktoum, Crown Prince of Dubai, Chairman of the Dubai Executive Council and Chairman of DFF’s Board of Trustees.

The initiative seeks to place Dubai Government entities 10 years ahead of the rest of the world in all sectors. To that end, H.H. Sheikh Hamdan adopted 26 projects presented by 24 government departments. The shortlisted projects were evaluated by a panel of experts out of a total of more than 160 ideas submitted by 36 parties in less than 365 days.

Saeed Al Nabouda, Acting Director General of the Dubai Culture and Arts Authority, said: “We wanted to step into the art technology realm, where art meets tech, and we soon realized that finance and fin-tech needed to be included too. With ArtBank, we are effectively launching the world’s first digital cryptocurrency for creativity. There are many lost opportunities within the local art economy, especially considering that artists lack exposure and policies to share creativity due to an opaque and often elitist art market; the art industry is very centralized with the wealthy.”

ArtBank is set to positively impact the sector, boosting creativity and placing special focus on digital art in an effort to establish a clear monetization model for all digital artists to be able to grow through their talent. The platform will bring together a peer-to-peer network of creative talents who can monetise their creativity through a digital portal that will focus on emerging talent and established artists alike.

“ArtBank will Transform Dubai into a 21st-Century city for the digital age,” Al Nabouda explained. “The platform will launch the world’s first digital currency for creativity, which will grow in value over time and strengthen the Dubai economy as the ecosystem grows. Over time, ArtBank will include a database of global and regional art, where artificial intelligence will help users navigate and interact. Several partnerships are set to arise in the implementation phase, including with renowned banks, investment firm, and smart solutions providers.”

Overseen by the Dubai Future Foundation (DFF), the Dubai 10X Initiative seeks to place Dubai Government entities 10 years ahead of the rest of the world in all sectors, propelling the emirate into the future by implementing today what other cities around the world will be implementing 10 years from now – all under the leadership of H.H. Sheikh Hamdan bin Mohammed bin Rashid Al Maktoum, Crown Prince of Dubai, Chairman of the Dubai Executive Council and Chairman of DFF’s Board of Trustees.