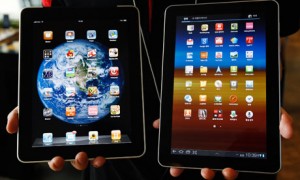 The District Court of The Hague ruled on Wednesday that Samsung’s Galaxy tablets do not infringe on an Apple design right, following a request by the Korean electronics giant.

At issue was Apple’s registration of a rectangular tablet with rounded corners as a “community design,” a form of intellectual property right available in the European Union that allows businesses to prevent others from copying the outward appearance of their products. Apple has attempted to assert the design right to prevent sales of Samsung tablets before, with mixed results.

In his ruling on Wednesday, the President of the panel of three judges, Peter Blok, wrote, “The Galaxy Tab 7.7, 8.9 and 10.1 of Samsung are not covered by the scope of the community design.” This means that Samsung does not infringe on an Apple design right when it manufactures, supplies, markets, imports, exports or uses those products in the Netherlands and the E.U., according to the verdict.

The court cleared a number of Samsung subsidiaries, including Samsung Benelux and Samsung Europe Logistics, of infringement, and ordered Apple to pay Samsung’s costs of €127,357 (US$169,512). If Apple attempts to obstruct Galaxy Tab sales, it faces a fine of €100,000 per day, up to a ceiling of €10 million, the court ruled.

This verdict does not, however, prevent Apple from litigating against Samsung, the spokeswoman said.

The community design at stake covers a “handheld computer” and shows sketches of an iPad-like device. The E.U. Office for Harmonisation in the Internal Market (OHIM) acknowledged registration of the design in 2004. OHIM also administers the database of E.U.-registered trademarks.

In August 2011, Apple lost an earlier lawsuit in the Netherlands involving the same community design, a loss that Apple appealed in the Dutch Supreme Court.

Because that case only covered the Galaxy Tab 10.1, Samsung sought clarification and asked the court to rule that its other tablets also don’t infringe on Apple’s design right, a request that resulted in Wednesday’s ruling.

In its verdict, the court referred to jurisprudence from other lawsuits between the two companies in Europe concerning the same community design. The most important one is a verdict of the U.K. Court of Appeal that confirmed in October a verdict from the U.K. High Court, ruling that the Galaxy Tab 7.7, 8.9 and 10.1 are not protected by the scope of the community design.

That ruling was used as a guide by the District Court of The Hague, because the British judgement related to the same legal issue as in the Dutch case, Blok wrote. “Moreover, the judgement was made by a higher court than this court,” he said, adding that the fact that there were other Samsung entities involved in the Dutch case does not lead to a different conclusion.

In principle, the District Court of The Hague should follow the British verdict, Blok wrote. Apple did not put forward any other arguments that were rejected by the U.K. Court of Appeal, and Apple did not specify a ground on which the court of The Hague could pass over this verdict, he added. “The mere fact that Apple does not agree with that assessment is therefore insufficient,” he said, and therefore he saw no reason to reach a different conclusion.

Blok lent less weight to Apple’s victory in Germany on October 24, 2011, when the District Court of Dusseldorf made a preliminary ruling that Samsung’s Galaxy Tab 7.7 infringed on the community design. That verdict was ratified by the Higher District Court of Dusseldorf on July 24, 2012, which imposed a provisional sales ban on the Tab 7.7 in the E.U. The case is still ongoing.

Samsung welcomed Wednesday’s ruling. “We continue to believe that Apple was not the first to design a tablet with a rectangular shape and rounded corners and that the origins of Apple’s registered design features can be found in numerous examples of prior art,” said Samsung spokeswoman Anne ter Braak in an emailed statement. “Should Apple continue to make excessive legal claims based on such generic designs, innovation in the industry could be harmed and consumer choice unduly limited.”