ECS released the L337 (Leet) Z87H3-A3X GANK Drone Series motherboard, the first one in the GANK Drone Series last month. Based on Intel Z87 Express Chipset, the motherboard enables support for some of the fastest processors including Intel 4th generations Core i7, i5 and i3 processors. The series have heatsink crafted into its design along with other features such as M.I.B X overclocking software tool, 8-channel HD Audio with Sound Blaster Cinema software and Intel 1217-V Gigabit LAN optimised for gaming.

Other specifications include 4 Dual-channel overclockable DDR3 memory at 1600Mhz which can be expanded to 3000+Mhz with the BIOs adjustable clock rates. The 2-way NVIDIA SLI or 2-way AMD CrossFire GPU scaling can also be used to double the graphics performance through two PCIs Gen3x16 slots with a bandwidth of 32GB/s at 8Ghz. The integrated graphics are gaming ready with DirectX11.1 compatibility for the latest compute shaders, direct 2D, multithreaded rendering and tessellation for rich realistic graphics and fluid gameplay.

With a triple monitor display output out of the box and a durable design, the series have Anti-Dust Shield technology installed in its design to protect the memory DIMMs and graphics card PCIe slots. 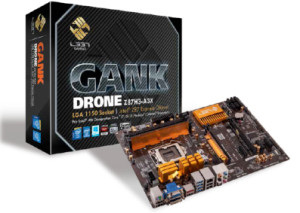