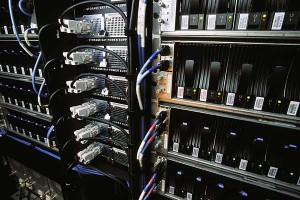 Lean storage techniques will keep a lid on storage investments over the next few years, though the world’s enterprises still are on track to buy 138 exabytes of storage system capacity in 2017, IDC said.

Annual sales of storage capacity will grow by more than 30 percent every year between 2013 and 2017, according to a forecast the research company announced on Monday. But that growth will be slower than the steep pace recorded a few years ago because organisations have adopted ways of using storage more efficiently, including cloud storage services, IDC analyst Natalya Yezhkova said.

Data deduplication, data compression, thin provisioning and storage virtualisation all will help enterprises limit their purchases of new storage capacity, Yezhkova said. Those techniques can reduce the amount of space consumed by a given bit of information or help companies allocate new storage as needed instead of overbuying.

That means the average amount of storage space companies acquire will grow by an average of 35 percent to 40 percent per year for external storage and 33 percent to 38 percent for internal, IDC said. That rate should stay pretty constant all through the forecast period, according to Yezhkova. In terms of enterprises’ storage spending, the annual average growth rate will be 4.1 percent, hitting US$42.5 billion in 2017.

Though fast, the annual growth rate from 2013 through 2017 will be dramatically slower than what it was before new efficiency techniques took hold, she said. Enterprises added 65 percent more storage space in 2005 and 59 percent in 2006 and 2007, according to Yezhkova. She went back to those years for comparison because the world financial crisis distorted storage spending from 2008 to 2011.

Part of the reason enterprises will be adding capacity more slowly in the coming years is that some will send their data to cloud storage services, Yezhkova said. If those cloud providers buy drives directly and assemble their own storage systems, they don’t show up in this IDC forecast. Google, for example, builds its own storage systems, she said. Among enterprises, only the largest ones with the biggest IT staffs would take that approach, Yezhkova said.

However, when companies shift some of their storage to cloud services, they are putting it on infrastructure that’s typically more efficient, she said. Because they’re in the business of storage, cloud providers run a tight ship.

Also in its report, IDC said developing countries are on their way to outpace more mature economies in storage spending. This will be largely because of faster economic growth in those countries, Yezhkova said. For example, IDC expects the region of Central Europe, Middle East and Africa, which includes growing Eastern European economies, to surpass Japan’s storage spending next year. By 2015, the Asia-Pacific region, excluding Japan, will pass up Western Europe, IDC said.