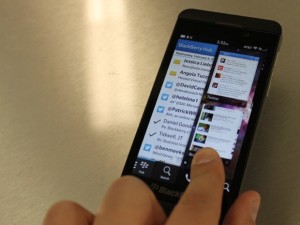 The researchers predicted that BlackBerry’s global smartphone market share will remain below 5 percent through 2016, thanks to powerful competition and a closed platform. What’s more, the company will have to target the consumer market and win customers back from Android and Apple.

“The question is whether the new platform is sufficient to motivate the buyer to choose BlackBerry over the platforms they know. It comes down to how effective BlackBerry’s marketing will be, and how much money they can spend to excite the user in favour of a BB10 device,” the researchers said.

Gartner also cautioned that, in the business market, BB10’s inability to be managed by popular MDM platforms could make it an adoption headache for enterprise users.

“Today, the only strong MDM solution for BB10 devices is BES10. While BES10 supports iOS and Android devices, it does so using policy manager features and not the container strategy it offers for BB10 devices, nor does BlackBerry offer the same policies on BB10 devices,” wrote the analysts.

BlackBerry’s long-awaited release of the modernized BB10 operating system in January, alongside a pair of updated smartphones, provided the first note of cautious optimism surrounding the newly renamed company in a very long time.

Generally positive (if rarely enthusiastic) initial reviews for the new software and gadgets followed, causing some to wonder if BlackBerry might once again play a role in the ultra-competitive mobile marketplace. Gartner’s new report seems unlikely to provide any further new rays of sunshine, however.