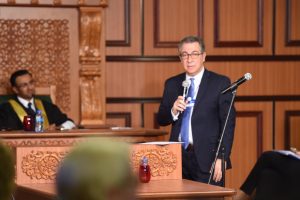 While technology and its role in redefining education was a resounding theme at the fifth annual Global Education & Skills Forum, held at Atlantis, The Palm from 18th-19th March, a keenly contested debate saw industry experts discuss IT’s tangible impact in education.

The motion ‘this house believes that education technology in the classroom is a waste of time and money’ drew some engaging insights that challenged an industry that could well be transformed in the coming years.

With 75 percent of school age residents attending private schools in the UAE, the standard of digital, high quality education is currently being set in the nation.

Varkey said, “While many sing praises of IT in the classroom, recent evidence suggests tech’s impact in classrooms is limited, with OECED finding that access to IT does little to bridge the gap between the advantaged and the disadvantaged.”

James Cantenera, CEO & founder, TULA Philippines, opening the debate for the motion, was unequivocal that investing in technology in classrooms is not the imperative today; with public funds in education being finite. He pointed out that “Education technology will benefit people only when other essentials are in place,” and warned of the consequences of technology misuse in an impressionable young audience. “Education technology will have its benefits one day, but right now it is wasteful before the classrooms are ready,” he said.

Countering the motion, Zaki Khoury, regional director, international organisations, Microsoft UAE, said education technology was “not about the digital divide but about digital dividend.” He argued that how students access ICT devices has evolved significantly in recent years, and claimed the 2012 OECD report, which served as the foundation of the motion, was dated.

“It is fundamental that in today’s technology revolution, we really need to leverage the assets we have, and also use opportunities to the maximum,” he said. “There is no stop for innovation, and we need to adapt for it. With the changes around us, can you believe that we can come to a conclusion based on emotion that uses the same tools built on methods of learning created hundred years ago? Instead of choosing between education and technology, we must focus on education and technology.”

In a flamboyant retort, Antony Jenkins, board member of Blockchain and former CEO of Barclays UK, drew on the “simple story” of The Emperor’s New Clothes to support the motion, reinforcing that technology giants are missing the big picture of the everyday realities of the educational system.  “Billions are spent on electronic white boards, tablets and software; it just lines the pockets of tech companies,” he said. “All these deflect resources from things that really matter – investing in teachers, for one.”