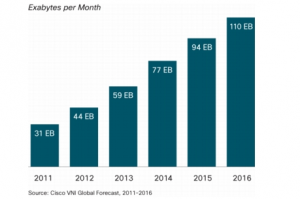 With global IP traffic surpassing the zettabyte (1 billion terabyte) threshold, there will be more internet traffic in 2016 than in all years up to 2012, said Doug Webster, senior director for service provider marketing at Cisco.

“It is just a staggering amount of growth facing global networks,” he said during the unveiling of Cisco’s Visual Networking Index Forecast for 2011 to 2016.

“Even your dog can now be connected to the internet, allowing you to track whether Rover is running after the collie or the postman,” he said.

The average fixed broadband speed will rise from the current 9 Mbps to 34 Mbps in 2016, the company said.

Video traffic will be a major area of growth, with mobile device users expecting a similar quality as they get on wired PCs or TV sets, Webster said. There will be 1.5 billion internet video users in 2016, up from 792 million in 2011. About 1.2 million[m] video minutes — the equivalent of 833 days of video — will cross the internet every second in 2016, according to Cisco. Internet video will make up 54 percent of all consumer traffic in 2016.

The highest traffic-generating countries in 2016 will be the U.S., with 22 exabytes per month, and China, with 12 exabytes per month. Internet traffic in India, Brazil and South Africa will grow by a compounded rate of more than 50 percent a year between 2011 and 2016, the company said.