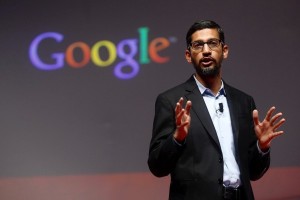 Google has confirmed for the first time that it plans to offer connectivity directly to mobile users in the U.S., but a senior executive downplayed the competition it would be to major U.S. cellular carriers.

Several reports have said the company is preparing a service that would be offered across an existing cellular network under a Google brand – a so-called “mobile virtual network operator” or MVNO. But the reports hadn’t been confirmed until Sundar Pichai, the company’s Senior Vice President, spoke at Mobile World Congress in Barcelona on Monday.

“You’ll see us announce it in the coming months,” said Pichai.

Pichai said it won’t be a full-service mobile network in competition with existing carriers.

Instead, he said, it will give Google a platform through which it can experiment with new services for Android smartphones.

He likened it to the work Google does today in hardware, where it works with existing partners on its Nexus line of devices. The phones give Google experience in hardware and a platform to try out various services, but are not meant to be a major challenge to companies like Samsung and HTC.

“We’ve always tried to push the boundary of what’s next in hardware and software, and we do that with the Nexus devices today,” he said. “We want to be able to experiment along those lines.”

Pichai said that he hopes cellular carriers will pick up some of the ideas and innovations it tries should they prove successful with users.

He didn’t provide any details about what those may be.

“In typical Google fashion, this is being done to spur the carriers to do things they haven’t done,” said Bill Menezes, a research analyst at Gartner. He said Google’s work will likely focus on areas it considers cellular service to be lacking.

“Everything Google does is designed to drive usage of its core businesses,” he said.

One of those might be in delivering better connectivity to devices as they switch between cellular and Wi-Fi, or perhaps allowing phones to jump between different cellular networks to maintain a strong signal.

It might also push new cellular price plans, perhaps offering consumers the chance to pay for exactly how much data they use each month rather than buying a bucket of data and seeing the unused allowance go to waste each month.