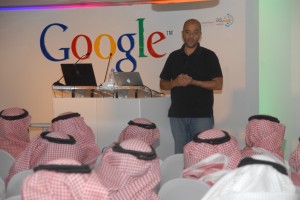 Google gathered over 120 executives and government officials from Saudi Arabia to hold a thought leadership Arabia day in Riyadh this week.

The event was held in association with Saudi Arabian General Investment Authority (SAGIA) and included discussions from industry leaders on the role of technology in scaling and fostering innovation, the future of the internet and its role in Saudi Arabia.

In association with, Google held a thought leadership Arabia 2012 day in Riyadh gathering more than 120  top executives and government officials from the Kingdom.

“Since its inception, Google has worked with countless entrepreneurs and businesses across the world which has allowed us to witness at first hand just how transformative the Internet can be,” said Mohammad Gawdat, VP of emerging SEEMEA region at Google

“We’ve seen some incredible success stories right here in the Kingdom which make us realize how much untapped economic potential there is here and that’s why we’re here today,” he added.

Google will hold another event in Saudi Arabia on March 24-25th. The ‘gl saudi arabia’ will gather software developers, webmasters, IT and business professionals, tech entrepreneurs, and university students for training and informative discussions around the future of innovation in the region, and how Google’s suite of products is a major driving force behind that innovation.