Dubai, UAE, 07/12/2021: Group-IB, one of the global cybersecurity leaders, has presented its research into global cyberthreats in the report Hi-Tech Crime Trends 2021/2022 at its annual threat hunting and intelligence conference,CyberCrimeCon’21. In the report, which explores cybercrime developments in H2 2020–H1 2021, Group-IB researchers analyse the increasing complexity of the global threat landscape and highlight the ever-growing role of alliances between threat actors. The trend manifests itself in partnerships between ransomware operators and initial access brokers under the Ransomware-as-a-Service model. Scammers also band together in clans to automate and streamline fraudulent operations. Conversely, individual cybercrimes such as carding are in decline for the first time in a while.

For the 10th consecutive year, the Hi-Tech Crime Trends report analyses the various aspects of the cybercriminal industry’s operations, examines attacks, and provides forecasts for the threat landscape for various sectors. For the first time, the report was divided into five major volumes, all with a different focus: ransomware, the sale of access to corporate networks, cyberwarfare, threats to the financial sector, and phishing and scams. The forecasts and recommendations outlined in Hi-Tech Crime Trends 2020-2021 seek to prevent damage and downtime for companies worldwide. 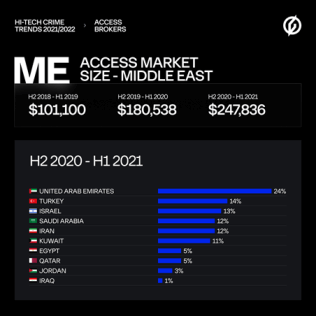 Unwanted guests: over 1,000 accesses to corporate networks were offered for sale in the darknet

One of the underlying trends on the cybercrime arena is a sharp increase in the number of offers to sale access to compromised corporate networks. The market of corporate initial access grew by almost 16% in H2 2020–H1 2021, from $6,189,388 to $7,165,387. The number of offers to sell access to companies almost tripled over the review period: from 362 to 1,099. This exclusive data was obtained by Group-IB’s Threat Intelligence & Attribution system, which gathers even deleted information from cybercriminal underground forums.

This segment of the cybercriminal underground has a relatively low entry barrier. Poor corporate cyber risk management combined with the fact that tools for conducting attacks against corporate networks are widely available both contributed to a record-breaking rise in the number of initial access brokers. In H2 2019–H1 2020, the Group-IB Threat Intelligence team detected only 86 active brokers. In H2 2020–H1 2021, however, this number skyrocketed to 262, with 229 new players joining the roster.

Most companies affected belonged to the manufacturing (9% of all companies), education (9%), financial services (9%), healthcare (7%), and commerce (7%). In the review period, the number of industries exploited by initial access brokers surged from 20 to 35, which indicates that cybercriminals are becoming aware of the variety of potential victims.

The geography of initial access brokers’ operations has also expanded. In H2 2020–H1 2021, the number of countries where cybercriminals broke into corporate networks increased from 42 to 68. US-based companies are the most popular among sellers of access to compromised networks — they account for 30% of all victim-companies in H2 2020–H1 2021, followed by France (5%), and the UK (4%).

In the Middle East alone, the total cost of all the accesses to the region’s companies available in the underground rose by 37% in the review period and totaled $247,836. Most of the accesses on the sale belonged to organisations from the United Arab Emirates (24%), which was followed by Israel (13%) and Turkey (13%), and Saudi Arabia (12%)and Iran (12%).

One of the main driving forces for initial access market growth is the steep increase in the number of ransomware attacks. Initial access brokers remove the need for ransomware operators to break into corporate networks on their own.

The unholy alliance of initial access brokers and ransomware operators as part of Ransomware-as-as-a-Service (RaaS) affiliate programs has led to the rise of the ransomware empire. In total, data relating to 2,371 companies were released on DLSs (Data Leak Sites) over H2 2020–H1 2021. This is an increase of an unprecedented 935%compared to the previous review period, when data relating to 229 victims was made public.

Thanks to the Threat Intelligence & Attribution system, Group-IB researchers were able to trace how the ransomware empire has evolved since it appeared. Group-IB’s team analysed private Ransomware affiliate programs, DLSs where they post exfiltrated data belonging to victims who refused to pay the ransom, and the most aggressive ransomware strains.

Over the review period, Group-IB analysts identified 21 new Ransomware-as-a-Service (RaaS) affiliate programs, which is a 19% increase compared to the previous period. During the review period, the cybercriminals mastered the use of DLSs, which are used as an additional source of pressure on their victims to make them pay the ransom by threatening to leak their data. In practice, however, victims can still find their data on the DLS even if the ransom is paid. The number of new DLSs more than doubled during the review period and reached 28, compared to 13 in H2 2019–H1 2020.

It is noteworthy that in the first three quarters of this year, ransomware operators released 47-percent more data on the attacked companies than in the entire 2020. Taking into account that cybercriminals release the data on only about 10 percent of their victims, the actual number of ransomware attack victims is dozens more. The number of companies that opt for paying ransom is estimated at 30%.

Country-wise, most companies whose data was posted on DLSs by ransomware operators in 2021 were based in the United States (968), Canada (110), and France (103), while most organisations affected belonged to the manufacturing (9.6%), real estate (9.5%), and transportation industries (8.2%).

Affiliate programs involve large numbers of participants, have a strict hierarchy, and use complex technical infrastructures to automate fraudulent activities. Phishing and scam affiliate programs actively use Telegram bots that provide participants with ready-to-use scam and phishing pages. This helps scale phishing campaigns and tailor them to banks, popular email services, and other organisations.

Phishing and scam affiliate programs, initially focused on Russia and other CIS countries, recently started their online migration to Europe, America, Asia, and the Middle East. This is exemplified by Classiscam: an automated scam-as-a-service designed to steal money and payment data. Group-IB is aware of at least 71 brands from 36 countries impersonated by affiliate program members. Phishing and scam websites create by affiliate program members most often mimic marketplaces (69.5%), delivery services (17.2%), and carpooling services (12.8%).

Over the review period, the carding market dropped by 26%, from $1.9 billion to $1.4 billion compared to the previous period. The decrease can be explained by the lower number of dumps (data stored on the magnetic stripe on bank cards) offered for sale: the number of offers shrank by 17%, from 70 million records to 58 million, due to the infamous card shop Joker’s Stash shutting down. Meanwhile, the average price of a bank card dump fell from $21.88 to $13.84, while the maximum price surged from $500 to $750.

An opposite trend was recorded on the market for the sale of bank card text data (bank card numbers, expiration dates, names of owners, addresses, CVVs): their number soared by 36%, from 28 million records to 38 million, which amongst others can be explained by the higher number of phishing web resources mimicking famous brands during the pandemic. The average price for text data climbed from $12.78 to $15.2, while the maximum price skyrocketed 7-fold: from $150 to an unprecedented $1,000.