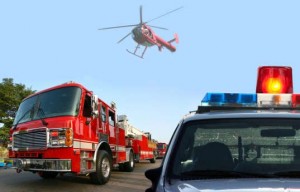 Researchers have proposed using home Wi-Fi routers as a backup mesh network in the event that cell and phone systems in cities and towns are overwhelmed during emergencies.

In a recently published paper, Kamill Panitzek and colleagues at the Technical University in Darmstadt in Germany describe how home routers could be linked to one another to form a huge informal backbone for use by fire, police and ambulance services.

Panitzek and his team tested the concept in the centre of Darmstadt by surveying the number, signal strength and location of routers using a sophisticated version of wardriving that was able to fix their coordinates with a high enough degree of accuracy to construct a hypothetical mesh.

The team found 1,971 routers, 212 of which had no encryption applied, and a further that used the obsolete WEP standard.

On the basis of the pattern of routers found, the team calculated that a resilient and sufficiently dense mesh network would be possible if a distance of around 30 metres between nodes was assumed.

One problem was that there were not enough open (i.e unsecured) routers which would require citizens to create an “emergency switch” mode to allow access to the number of nodes needed to create a viable mesh.

Most recent home routers can support such a system without modification as long as they allow for the creation of an open ‘guest’ network running in parallel to the user’s secured Wi-Fi access that is firewalled from it.

“We found that with a communication range of 30 metres a mesh network could be easily constructed in urban areas like our hometown. The resulting networks showed to be resilient to node failures,” Panitzek said in the analysis.

The team accepts that there are some barriers to the idea beyond the mere density of routers available in a particular locality. Would users agree to have an open channel enabled on their routers?

A better idea might be for router makers to introduce an emergency mode into their products that users would know was fully secure, but the prospects of that look remote for now without legislation.

Mesh networks have been a buzz technology for some years and have found commercial applications. Arbua Networks launched a small meshing system for its own access points in 2011.

Although a powerful idea, the technology remains on the fringes of development.