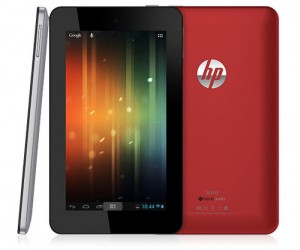 Hewlett-Packard on Friday started shipping its US$169.99 Slate 7 tablet with Android 4.1, which signals the company’s reentry into the consumer tablet market after the TouchPad imploded in 2011.

The tablet became available first in the U.S. through its website. The tablet is also available for order on the company’s U.K. website, and is scheduled to ship on May 1.

The Slate 7 weighs 370 grams, offers five hours of battery life on video playback, and is the company’s first tablet with Android OS. The seven-inch screen displays images at a resolution of 1024 x 600 pixels. The tablet has 8GB of internal storage, but has a micro-SD slot for expandable storage. It has a dual-core ARM Cortex-A9 processor running at 1.4GHz and key features include a 3-megapixel back camera, a VGA front camera and Wi-Fi. Other features include Beats audio, which is also found on HP’s laptops and desktops.

HP hopes buyers will choose its aggressively priced tablet over other Android tablets like Google’s Nexus, Samsung’s Galaxy Tab and Amazon’s Kindle Fire HD, which are priced at $199. But HP’s well-entrenched rivals offer a suite of services and content including music and movies along with the tablets. HP is relying on Google for delivery of music, movies and TV shows to its tablets, but has said it could offer its own cloud service when the time is right.

Slate 7 is HP’s first consumer tablet offering since the 2011 debacle of the webOS-based TouchPad tablet, which was nixed after HP that year announced it would either sell or spin off its Personal Systems Group, which dealt in PCs and tablets. In a fire sale, HP sold off its remaining TouchPad tablets at prices starting at $99 and people lined up outside stores to buy the product. HP ultimately retained the PS, and sold off the webOS assets to LG in February this year.

Analysts have said that the tablet’s price, specifications and HP brand name are attractive.

HP has said it is experimenting with different screen sizes, and has said more consumer tablets would be released this year. HP also offers business tablets like the ElitePad 900 based on Windows 8. The $649 Envy X2 with Windows 8 is a hybrid that can be used as a tablet or a laptop.