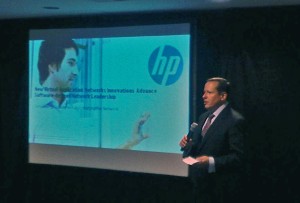 HP this week will unveil a software-defined networking portfolio that spans infrastructure, control plane operations and applications in an effort to lead the emerging SDN market.

HP will roll out its own SDN controller, a separate control plane appliance and software for dictating flows in an OpenFlow-based SDN. HP will also unveil nine more OpenFlow-enabled switches through the addition of the open source SDN protocol to its existing 3800 line, which debuted a year ago.

It will also roll out application software that allows enterprises to create their own, isolated virtual cloud network in a public cloud. HP will also unveil three applications it developed for its SDN controller.

HP claims that no other vendor, including Cisco, offers as complete an SDN portfolio as it does, with a controller, 25 Open-Flow-enabled switches, and applications. HP also has beta customers for its SDN package, including HBO and CERN.

“We believe this is the correct approach to make SDN useful in the market,” says Saar Gillai, HP Networking CTO.

The stakes are high for HP. SDNs take networking control largely away from the hardware infrastructure and put it in software. Since Cisco is so dominant in networking hardware, SDNs could provide a way for competitors like HP–  and Juniper — to tip the balance of the networking market more toward them.

And the controller is the place to start. HP’s Virtual Application Networks SDN Controller is an x86-based appliance or software that runs on an x86-based server. It supports OpenFlow, and is designed to create a centralised view of the network and automate network configuration of devices by eliminating thousands of manual CLI entries.

It also provides APIs to third-party developers to integrate custom enterprise applications.
The controller can govern OpenFlow-enabled switches like the nine 3800 series rolled out this week, and the 16 unveiled earlier this year.

Its southbound interface relays configuration instructions to switches with OpenFlow agents, while it’s northbound representational state transfer interfaces — developed by HP as the industry mulls standardisation of these interfaces — relays state information back to the controller and up to the SDN orchestration systems.

The controller also has exposed APIs so third-party software developers can write their own applications to it. HP has already written three: the Virtual Cloud Network application, Sentinel security and a distributed load balancing application co-developed with CERN.

The Virtual Cloud Networking application enables enterprises to configure a “self-service” VPN in a public cloud and control the introduction of new services and applications. It automates network provisioning but limits provisioning actions to low-risk infrastructure elements. It helps scale networks beyond the limits of traditional hardware, and supports the OpenStack API for public and private cloud orchestration.

HP says that even though it is “leveraging” OpenFlow in the switches and controller, there is nothing that would preclude the products from utilizing other elements of SDN and programmability. HP plans to eventually also support VXLAN and NVGRE as network virtualisation overlays in its products, but Mayer and Gillai did not provide a time frame for doing so.

HP SDN services will be available in early 2013.