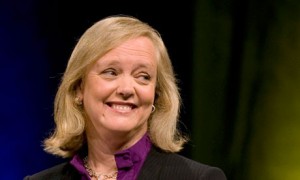 Hewlett-Packard on Tuesday said it has begun to integrate its hardware and management systems with Google Apps.

The announcement was part of CEO Meg Whitman’s nearly hour-long presentation at its big user conference in Las Vegas. She talked about IT challenges facing companies, profiled some of its biggest users, United and Nationwide among them, and its product directions.

But mostly Whitman wanted to instill confidence that HP has moved past its job cuts and bad quarters, and is completely focused on meeting customer expectations, including those businesses that are using Google.

With more than 5 million small businesses running Google Apps for Business, HP wants to ensure that its technology, hardware, network and management systems, integrate easily. HP is calling it “HP SMB IT in a Box.”

“What this venture is designed to do,” said Whitman, “is to help simplify the customer’s IT environment,” for those small- to medium-sized businesses that adopt Google Apps, which includes Gmail, Calendar, Drive and HP products.

Whitman’s told attendees that HP is on solid footing and moving ahead after a period that included a lay-off of some 30,000 employees, about 8 percent of its workforce, and some rough financial quarters.

“I met with over 520 customers last year, and 225 partners,” said Whitman. “You told me what you need in a partner, and you told me how HP can be a better one.”

Whitman said the first thing she heard from customers is that they “have to have confidence in HP’s future – done,” she said. She added the company has strengthened its financial performance and stabilised the business. There was applause.

Dan Larot, a systems engineer with a software firm, said that “after listening to her, I’m encouraged.”

“I’m just hoping that HP can turn it around,” said Larot, who was on the trade show floor following Whitman’s presentation. Looking at all the offerings that were available, he asked, “is it going to stick, is it going to work?”

Traci Sherritt, an enterprise quality assurance testing manager at a bank, said Whitman “was impressive to watch,” and she relayed “a human element” that said “we are listening to you.”

“I think that people sat all the way to the end [of her speech] speaks for itself,” Sherritt said.