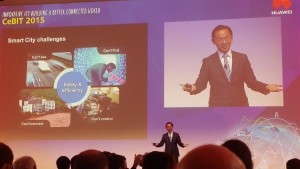 “The four major innovative ICT technologies, which include mobile broadband, software-defined networking (SDN), cloud computing and Big Data, are reshaping all traditional industries,” said Ryan Ding,  Executive  Director of the Board  and  President  of Products  &  Solutions,  Huawei.  “ICT infrastructure has transformed from being an enterprise’s support system to a part of the value-adding production system. It has become a powerful engine that facilitates business transformations for enterprises across different industries. With our innovative approach and focus on ICT infrastructure, Huawei is openly collaborating with partners and customers to promote business transformation and the development of a better connected world.”

The eLTE Broadband Trunking Solution is based on 4G technology, and supports voice trunking, data, and video in one network.

Aside from the common frequencies of 400MHz, 800MHz, 1.4GHz, 1.8GHz and 2.3GHz, the solution also supports broadband trunking communications in the 3.5GHz frequency.

The solution is powered by the EP820 Broadband Trunking Handset and the EM720 Industrial-Grade Mobile Hotspot,

The solution supports connections to intelligent video systems, telepresence, IP call centres and third-party applications, which helps to improve the efficiency of inter-department collaboration and emergency response of governments overall.

Huawei says the OceanStor 9000 enables media organisations to save operating costs by reducing machine room space by 200 percent and energy consumption by 32 percent.

It allows the management of the broadcast production process including reporting, editing, broadcasting, managing and storing, in a single storage system.

CeBIT 2015 is held at the Hannover Exhibition Centre in Hannover, Germany, from March 16th-20th.