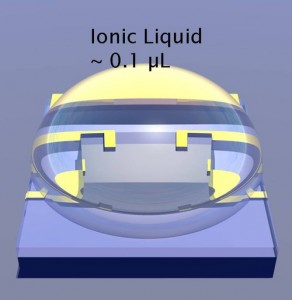 In its efforts to explore methods of computing without silicon, IBM has found a way to make transistors that could be fashioned into virtual circuitry, mimicking the way in which the human brain operates.

The proposed transistors would be made from strongly correlated materials, which researchers have found to posses characteristics favorable for building more powerful, less power-hungry computation circuitry.

“The scaling of conventional-based transistors is nearing an end after a fantastic run of 50 years,” said Stuart Parkin, an IBM fellow at IBM Research who led the research. “We need to consider alternative devices and materials that will have to operate entirely differently. There aren’t many avenues to follow beyond silicon. One of them is correlated electronic systems.”

Parkin’s team is the first to convert metal oxides from an insulated to conductive state by applying oxygen ions to the material. The team published details of the work in this week’s edition of the Science journal.

The circuitry used in today’s computer processors, memory and other components is made from large numbers of integrated transistors built from silicon wafers. Conventional transistors work by applying a small voltage across a gate, which can control – or switch on or off – a larger current passing through the transistor.

IBM’s technique uses another approach to switching conductive states of a material. It requires strongly correlated electron materials, such as metal oxides. By conventional theory, these materials should act like conductors, but they are actually insulators. “They don’t obey conventional band theory,” Parkin said. Under certain conditions, however, they can change their conductive states.

Research has been going on for several years, in fact, to find ways of changing conductivity states in strongly correlated materials. Previous approaches, however, relied on techniques of applying stress to a material, or subjecting it to temperature changes. Neither approach would be practical to use in mass-produced circuitry. IBM’s specific breakthrough, described in the paper, is that the conductive state of material could be changed by injecting oxygen molecules.

In IBM’s setup, these electrons are introduced through contact with an ionic liquid, consisting of large, irregularly shaped molecules. When a voltage is applied to this liquid, and the liquid is placed on the oxide material, the material can change from a conductor to an insulator, or vice versa.

This approach could be more energy effective than standard silicon transistors, in that the resulting transistors would be non-volatile – they don’t need to be constantly refreshed with a power source to maintain their state, Parkin said. A charge can be set by applying the voltage once.

These materials may not switch their states as quickly as silicon transistors, though their relatively low switching speed may not be a factor, given their greater flexibility, Parkin said. In theory such transistors could mimic how the human brain operates in that “liquids and currents of ions [are used] to change materials,” Parkin said. “We know brains can carry out computing operations a million times more efficiently than silicon-based computers,” Parkin said.

To work, such circuitry would take advantage of microfluidics, the emerging practice of engineering around how to tightly control small amounts of liquids in a system. “We would direct fluids to particular surfaces or three-dimensional structures of oxides and then change their properties by applying gate voltages,” Parkin said. Entire virtual circuits could be built and once their work is finished, they could be torn down by simply passing liquid though other channels.