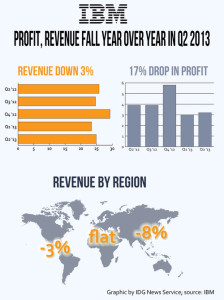 A rebound for IBM failed to materialise in the second quarter, as profit and sales declined along with a slump in revenue from hardware and services.

However, in its quarterly financial report Thursday, the company raised its forecast for earnings per share, excluding restructuring charges, for the year.

Second-quarter net income declined 17 percent from the year-earlier period to $3.2 billion, while revenue declined by 3 percent to $24.9 billion. Adjusting for currency fluctuations, revenue was down 1 percent.

Revenue was under the forecast of $25.37 billion from analysts polled by Thomson Reuters. However, operating earnings per share, excluding restructuring charges, was $3.91, above the analyst forecast of $3.77.

IBM raised its full-year earnings forecast to $16.90 a share, up from $16.70 previously. The numbers exclude restructuring and other charges.

The decline in both profit and revenue was worse than last quarter, when IBM reported a 5 percent decline in revenue to $23.4 billion and a 1 percent drop on net income to $3 billion.

But traders, apparently pleased by IBM earnings-per-share numbers, boosted company shares in after-hours trading to $194.55, up by $0.70 from the day’s closing number.

IBM is generally considered a bellwether for the tech industry due to its global reach and broad portfolio of software, hardware and services. What’s more, in a sign of the company’s importance as an indicator for markets in general, it is the most heavily weighted stock on the Dow Jones Industrial Average index.

Though services and overall hardware sales dropped during the second quarter, company officials stressed strength in software and big systems.

“In the second quarter, we delivered strong performance in our higher-value software and mainframe businesses,” said Ginni Rometty, IBM chairman, president and chief executive officer. Rometty said she expects improvement in the last half of the year, partly as a result of restructuring efforts that include acquisitions, sales of nonstrategic businesses and “skills rebalancing.”

The company’s key Global Technology Services segment, however, suffered a 5 percent decline in revenue to $9.5 billion.

Revenue for the Systems and Technology unit, which includes hardware products, was $3.8 billion, down 12 percent.

Revenue for major geographic segments of the company’s business were flat or in decline during the quarter. Revenue for the Americas was $10.7 billion, a decrease of 3 percent; revenue from the Europe/Middle East/Africa area was flat at $7.8 billion; and Asia-Pacific revenue decreased 8 percent to $5.8 billion.