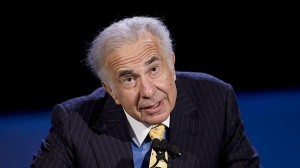 The take-over bout for Dell resumed on Monday, with investor Carl Icahn sounding off on the proposal from Michael Dell and Silver Lake Partners to change rules governing the shareholder vote for a revised bid to take the PC maker private.

Company founder Michael Dell and his buyout partner, Silver Lake, last week offered shareholders $13.75 per share for the company, an increase from the $13.65 proposed in February. As part of the revised offered, the parties proposed a change in the shareholder vote in which only “yes” or “no” votes will be counted, and non-votes or abstentions will not count.

Icahn on Monday urged Dell’s board not to support the proposed shareholder vote change as it could disenfranchise voters.

“The plain and simple fact is that Michael Dell and Silver Lake have underestimated the extent of stockholder opposition to the Michael Dell/Silver Lake transaction and are unwilling to pay fair value to obtain approval of their interested-party freeze-out transaction,” Icahn wrote in a statement.

Many shareholders may not have voted “because they knew that their inaction would count as a vote against the merger,” Icahn said.

The final shareholder vote on the deal is due on August 2 after being delayed twice. Analysts said that Michael Dell may have failed to get enough shareholder backing to take the company private, which prompted him to raise the bid and propose the vote rule change. Michael Dell noted that according to the voting rules previously in place, abstentions would automatically count as “no,” but that would not be a fair representation of the true wishes of all shareholders.

“According to our latest tally, approximately 27 percent of the unaffiliated shares have not yet been voted. The presumption that these shares should be treated as if they had voted against the transaction is patently unfair,” Michael Dell and Silver Lake said in a statement issued last week. Unaffiliated shares are shares not tied to Michael Dell’s 16 percent share. For the Dell-Silver Lake bid to go through, a majority of shareholders not including Michael Dell need to approve it.

Some shareholders opposed Dell’s earlier proposal because they believed the company was being undervalued. Several shareholder advisory firms, however, recommended shareholders vote in favour of the deal because Dell’s value as a public company may fall as the PC market weakens.

Icahn has put out many statements criticising Dell’s board as he leads the battle against the company being taken private by the founder. Michael Dell, in an interview this week with the Wall Street Journal, said he will not budge from the current proposal, saying $13.75 per share is the “best and final offer.” He also said the he would want to remain with the company even if the deal falls through.

Analysts have said that any deal may take a long time to close if Icahn seeks legal recourse in the courts against Dell’s board for accepting an offer that is not in the interest of shareholders.