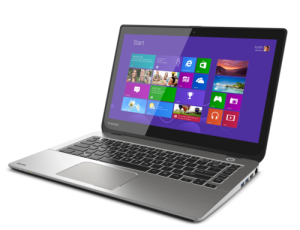 In an embargoed briefing last week, Toshiba’s group product marketing manager, Young Bae, said that these new Satellite E series notebooks will take design cues from the company’s luxury Kirabook. “This less-expensive series will be made with aluminium [versus the Kirabook’s magnesium],” said Bae. “But they will have many of the same high-end features [as the Kirabook]. We’ve spent the last year filtering down high-end features to our lower-end platforms.”

Bae said while the Satellite E series notebooks will range in price from just under $600 to less than $900, they will feature brushed aluminium casings, backlit keyboards, two USB 3.0 ports (one with USB Sleep & Charge, for charging USB devices while the computer is asleep), one USB 2.0 port, HDMI out, a full-size gigabit Ethernet port, an SD card slot, and either 500 or 750GB mechanical hard drives that can be combined with an optional 32GB SSD cache. The 15.6-inch model will have an embedded numeric keypad.

Most Satellite E-series notebooks will rely on integrated graphics, but customers will have the option of configuring them with a discrete graphics processor in the form of Nvidia’s GeForce 740M. Either way, the display will be limited to a native resolution of 1366 by 768 pixels.