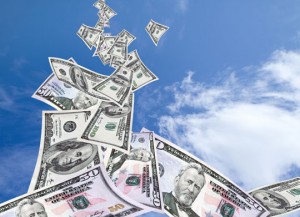 Worldwide spending on public IT cloud services is expected to touch the $100 billion mark in 2016, as companies accelerate their shift to the cloud services model for IT consumption, according to research firm IDC.

Public IT cloud services are defined by IDC as those offerings designed for, and commercially offered to, a largely unrestricted marketplace of potential users.

“The IT industry is in the midst of an important transformative period as companies invest in the technologies that will drive growth and innovation over the next two to three decades,” said Frank Gens, senior vice president and chief analyst at IDC.

In 2012, IDC expects global public IT services spending to amount to more than $40 billion, with public IT cloud services said to see a compound annual growth rate (CAGR) of 26.4% over the period from 2012–2016 – five times that of the IT industry overall.

The study, ‘Worldwide and Regional Public IT Cloud Services 2012-2016 Forecast’, noted that by 2016, public IT cloud services will account for 16% of IT revenue in five key technology categories: applications, system infrastructure software, platform as a service (PaaS), servers, and basic storage – cloud services will generate 41% of all growth in these categories by 2016.

IDC stated that while Software as a service (SaaS) will claim the largest share of public IT cloud services spending over the next five years, other categories such as basic storage and platform as a service, will show faster growth. It was also pointed out that faster PaaS rollouts over the next year and a half will be critical to maintaining the strong cloud momentum.

“By the end of the decade, IDC expects at least 80% of the industry’s growth, and enterprises’ highest-value leverage of IT, will be driven by cloud services and the other 3rd Platform technologies,” Gens added.

The US will continue to be the largest public services cloud market, followed by the Western Europe and APAC regions (excluding Japan), IDC said. Interestingly, the fastest growth in public IT services spending will be seen in the emerging markets, which will account for almost 30% of net-new public IT cloud services spending growth in 2016.

IDC noted that it expects public clouds to mature and eventually integrate many of the features – primarily security and availability – that make private clouds an attractive option.