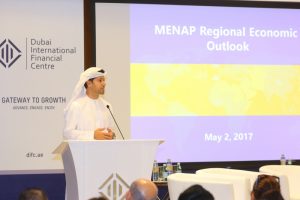 According to the report, growth in oil-exporting countries of the MENAP region will slow down in 2017 due to the oil production cuts approved under the terms of the recent OPEC+ agreement.

The latest edition of the MENAP Regional Economic Outlook found that regional growth is expected to remain at 2.6 percent for 2017, rising to 3.4 percent in 2018, compared to estimated global growth of 3.5 percent and 3.6 percent respectively. Higher commodity prices and stronger global trade will support economic activity, while higher interest rates will – to varying degrees – increase fiscal vulnerabilities across the region.

Produced by IMF, the report uses internationally verified data to highlight emerging trends as well as recent economic developments, opportunities and challenges that set the tone for growth, trade and investment in the region.

Non-oil growth for the MENAP oil exporters is expected to accelerate from 0.4 percent in 2016 to 2.9 percent in 2017, although the production cuts following the OPEC agreement are reducing headline growth.

Jihad Azour, Director of the Middle East and Central Asia department at IMF, said, “A more favourable global environment – including higher expected growth and some firming of commodity prices – is providing some breathing space for the MENAP region after what has been a difficult period.”

Arif Amiri, chief executive officer of DIFC Authority, said, “The IMF Regional Economic Outlook is a trusted resource for business in the region and everyone involved in the financial sector. 2017 looks set to be defined regionally by a focus on economic diversification, privatisation and on the inclusion of emerging economies in the global financial system. One of the strongest macroeconomic drivers, in fact, is the rise of emerging market economies. They are generating new investment opportunities and serve as an increasingly important source of capital.”