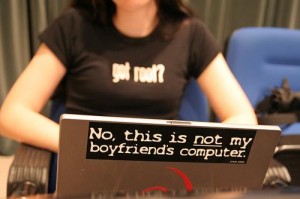 The field of IT is notorious for being persistently male-dominated, but that doesn’t mean women still suffer from a gender gap when it comes to pay.

In fact, the compensation gender gap has disappeared for tech workers, according to the latest salary survey from IT careers site Dice. Specifically, ever since 2009, average salaries have been equivalent for male and female tech professionals, the company reported  on Tuesday–as long as you’re comparing equal levels of experience and education and parallel job titles.

Men actually did out-earn women overall in the 2013-2012 Dice Salary Survey, earning an average annual income of $95,929 compared with women’s $87,527. However, that difference is driven by the fact that the two groups tend to hold different positions, Dice says. Whether that’s the result of personal choice or institutional bias is unclear, it added.

Whichever the case, project manager is the only title shared by the genders in their top five positions. That’s the number-one position for women, in fact, followed by business analyst, “other IT,” QA tester, and technical recruiter.

For men, the top five positions are software engineer in the number-one spot followed by systems administrator, project manager, IT management, and applications developer.

Women also tend to be about as satisfied as men with their salaries, Dice found, with 58 percent of women stating they were satisfied, as compared with 56 percent of their male counterparts.

In general, technology salaries in the U.S. saw the biggest jump in more than a decade in this report, showing a greater-than-five-percent increase in average annual wages to $85,619, up from $81,327 in 2011.

The Dice Salary Survey was administered online to 15,049 employed technology professionals responding between September 24 and November 16, 2012. Also reported earlier was the jump in salaries for those with Linux skills.

Of course, it’s worth noting that Dice’s latest report focuses purely on salary, so all the many other factors that may still serve as obstacles for women are not included.

Still, it’s encouraging news that the pay gap isn’t what it once was, and there are clearly more than a few women who have become leaders in the IT world, providing inspiration for future generations.

“When it comes to technology employment, it’s a skills-driven marketplace,” concluded Tom Silver, a senior vice president with Dice. “The ability to apply that know-how to a given problem remains the core of employment–why tech professionals get hired and how they are compensated.”