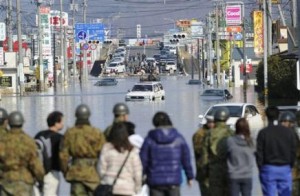 The company sent 259 newly hired employees from its training program to Ishinomaki, a coastal city in Japan’s northeastern Miyagi Prefecture, to help process an estimated 7,000 to 10,000 documents that have been gathered by volunteers in the area, spokesman Shungo Moriya said.

“We sent the employees along with two of our scanner-copiers as a sort of trial. If this is successful, we will consider continuing and expanding to other regions,” Moriya said.

Volunteers in the city have been collecting the materials, which include official documents from city offices and records from local schools, and attempting to clean and store them. The volunteers from Fuji Xerox will help wash, dry and scan them using the copiers. Currently based near Tokyo for training, they will be in the northern city until Thursday.

Regions even miles from the shore were swamped by tsunamis triggered by a magnitude-9.0 earthquake that struck off the coast. In Ishinomaki, some neighborhoods were completely wiped out, while others were inundated by seawater and left coated with mud, debris, and rotten seafood from processing plants nearby.

The complete loss of paper-based documents has been a major headache for local governments and families in resolving insurance claims, handing out government assistance and establishing ownership of banking and other accounts.

Last year’s disasters triggered a massive volunteer movement in Japan, and much of the initial work was labor intensive, helping communities clear rubble and clean out homes. Other efforts have been launched to help victims find and restore emotional keepsakes like family photographs.

In Japan, new employees at many companies officially start their jobs en masse in April, with the start of the new fiscal year, and undergo several months of training.