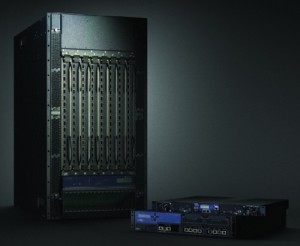 Juniper this week unveiled a version of its fabric switches for mid-sized data centres and also increased the scalability of its core Ethernet switches.

The extensions to Juniper’s QFabric and EX8200 switches are designed to broaden the addressable market for the devices while allowing customers to scale their networks and eliminate switching tiers. QFabric, for instance, is intended to enable users to build low latency, single-tier fabrics for data centres where each switch feels only one-hop away.

Mid-sized data centres and satellite facilities can now implement these designs with the new QFX3000-M. The QFX3000-M includes a fixed configuration interconnect, the QFX3600-I, with 16 40Gbps ports. It also includes a 40G top-of-rack switch, or node, called the QFX3600, also with 16 40G ports in 1 RU. The new system can also use the existing QFX3500 10G nodes that have been shipping since September 2011, and the QFX3600 can also serve as the node for the existing QFX3000-G Interconnect.

Juniper says it has 150 QFabric customers.

The EX8200, meanwhile, is designed for mixed environments of 10G and Gigabit Ethernet. Up to eight of the switches can now be logically linked over distances of 80 kilometers using Juniper’s Virtual Chassis technology.

Previously, only two EX8200 could be linked using Virtual Chassis.

This enhancement allows users to manage up to four core networks of two switches each as a single switch.

Bach will be responsible for helping define Juniper’s financial services market sales strategy and customer architectures for cloud computing and the mobile Internet. He will report to Gene Chao, vice president, global industries, strategy and solutions at Juniper.