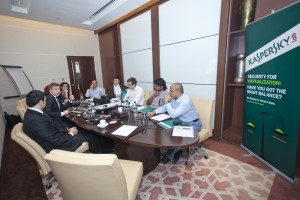 Kaspersky Lab today announced the release of its latest security technology to protect virtualised companies from malware and cyber criminals.

Kaspersky Security for Virtualization is delivered as a virtual security appliance that integrates with VMware vShield Endpoint to provide agent-less, anti-malware security based upon Kaspersky Lab’s advanced anti-malware engine.

It provides customers with a single, unified management platform for their virtual, physical and mobile environments, Kaspersky added.

All of this combines to deliver increased consolidation ratios for customers and managed by the Kaspersky Security Center administration console – “a single pane of glass” – the security firm added.

“Our integration with VMware gives customers the ability to deploy Kaspersky Lab’s industry-leading security technology through their trusted VMware infrastructure. This is only the beginning of our partnership,” said Petr Merkulov, chief product officer at Kaspersky Lab.

“We plan to develop more functionality with the VMware API, along with the ability to isolate any infected virtual machines before malware can spread across the network. Our valuable channel partners are thrilled to have an optimized virtualisation solution added to their portfolio of Kaspersky Lab products. This is the first step for Kaspersky Lab’s virtual security offerings as we plan to expand our functionality across all popular virtualisation platforms,” he added.

Tarek Kuzbari, managing director at Kaspersky Lab Middle East and Turkey, said it is important companies that virtualise are away that the security issues remain the same.

“There was the concept that by using virtual machines you were protected, but actually virtual machines have the same threats and exposure as physical machines. That is why protecting these machines is becoming more and more important. The difference with what we’re offering is we are able to provide you with this protection without affecting the performance of the virtual machines,” Kuzbari said.

Vasily Dyagilev, managing director at Kaspersky Lab emerging markets, said that the new solution does not aim to provide better security, but to improve manageability and efficiency.

“Just imagine you have 1000 virtual machines in your environment and every single one is running the antivirus engine so you actually have 1000 antivirus agents running at the same time. Then imagine they start uploading their latest update all at once. The network capacity will get stuck with the amount of traffic that is generated. The solution that we are offering is trying to look at it from another side. Instead of having one thousand engines running on each and every machine, you have one engine that is run on a separate machine but protects all of the virtual machines in the environment,” he said.

“This solution is not something radically new in terms of fighting the malware. It’s a solution that actually provides better usage of the technology resources inside the company. It’s much more manageable, flexible and decreases the cost of operation and chance that one of engines that is updated has problems. It consumes 97 times less of the virtual servers’ resources than current agent-based solutions from other vendors. It’s a new way to look at virtualisation and balance the performance and productivity of the network,” he added.