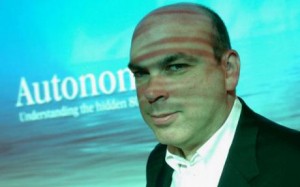 The feud between Autonomy founder Mike Lynch and Hewlett-Packard’s leadership over alleged accounting fraud at the software vendor has intensified, with Lynch declaring his innocence in an open letter to the company’s board and HP quickly returning fire.

HP said last week that it would take a US$8.8 billion write-down in part due to the alleged accounting improprieties by Autonomy, which it acquired last year for $10.3 billion. The deal was roundly criticised by some observers, who believed HP had paid too much. But the alleged accounting fraud caused Autonomy to be highly overvalued, according to HP.

“It was shocking that HP put non-specific but highly damaging allegations into the public domain without prior notification or contact with me, as former CEO of Autonomy,” he wrote. “I utterly reject all allegations of impropriety. “

“Having no details beyond the limited public information provided last week, and still with no further contact from you, I am writing today to ask you, the board of HP, for immediate and specific explanations for the allegations HP is making,” Lynch added. “HP should provide me with the interim report and any other documents which you say you have provided to the SEC and the SFO so that I can answer whatever is alleged, instead of the selective disclosure of non-material information via background discussions with the media.”

Lynch challenged HP to answer a number of questions, including how it determined the alleged fraud constituted more than $5 billion of the $8.8 billion write-down.

“In order to justify a $5 billion accounting write-down, a significant amount of revenue must be involved,” he wrote. “Please explain how such issues could possibly have gone undetected during the extensive acquisition due diligence process and HP’s financial oversight of Autonomy for a year from acquisition until October 2012 (a period during which all of the Autonomy finance reported to HP’s CFO Cathie Lesjak).”

Lynch, who left HP in May, also questioned why the vendor’s management waited until now to disclose the allegations to shareholders.

The open letter was just the latest move by Lynch in response to HP’s allegations, as he has granted a number of media interviews on the subject.

“While Dr. Lynch is eager for a debate, we believe the legal process is the correct method in which to bring out the facts and take action on behalf of our shareholders,” it stated. “In that setting, we look forward to hearing Dr. Lynch and other former Autonomy employees answer questions under penalty of perjury.”

“The matter is in the hands of the authorities, including the UK Serious Fraud Office, the US Securities and Exchange Commission’s Enforcement Division and the US Department of Justice, and we will defer to them as to how they wish to engage with Dr. Lynch,” it added. “In addition, HP will take legal action against the parties involved at the appropriate time.”