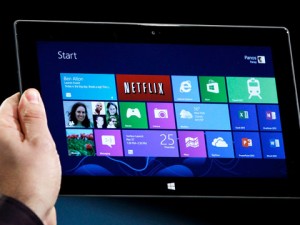 Microsoft has sold 40 million licenses of the Windows 8 OS since its launch a month ago.

“We believe Windows 8 is shaping up is as one of the company’s most successful products,” said Tami Reller, Microsoft’s chief marketing officer and chief financial officer for Windows. Reller spoke Tuesday at the Credit Suisse Annual Technology Conference, in Scottsdale, Arizona.

She also said that Outlook.com, a relaunch of the company’s Hotmail service, has attracted 25 million users.

During her talk, Reller pointed to a number of other statistics indicating how well Windows 8 has fared with users, perhaps addressing criticisms of its user interface. “When people experience Windows 8, they do find it is easy to get started and fun to learn,” she said. “We know from the data we’re getting in that customers do indeed get the product.”

Since the launch, Microsoft has logged over 1.5 billion impressions of users deploying the start screen through remote telemetry. “So we know this is home base for customers, as we intended it to be,” she said. Customers are also personalising the start screen. Within the first three weeks, customers on average added 19 tiles to the ones that are already installed on the system.

Also, 90 percent of customers use the charms, which are OS features such as search and share that can be run within different apps. They use these charms on average two to three times each time they run the device. Over 85 percent use the desktop during their first use and approximately half visit the app store. The number of apps in the store has doubled since the OS launch. Several apps have already been downloaded more than a million times.

Microsoft has noted earlier in the month that Window 8’s adoption has been faster than its predecessor, the generally well-received Windows 7, though Reller cautioned against comparing the two OSes. Windows 7 was not addressing a major change in the underlying hardware platforms, like Windows 8 is doing with the emergence of new portable form factors.

“This has been the biggest project since Windows 95,” she said.

Reller recently took over part of the duties of Steven Sinofsky, who was the president of the Windows Division until he stepped down earlier this month. Julie Larson-Green took over the engineering direction of Windows, while Reller assumed control of the business and marketing duties of the flagship OS. During the question-and-answer period, the moderator asked how the departure of Sinofsky will affect Windows development. Reller responded that the Windows team has a work ethic that does not rely on any one leader.

“The team, holistically, is in great, great shape,” she said.