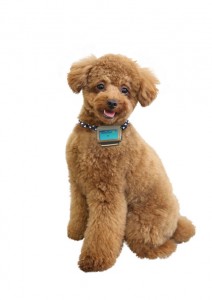 Now, even your dog can be in the cloud.

Fujitsu is readying a new pedometer for canines that stores and tracks their health data online. The device, which clips on to a dog’s collar, uses a motion sensor to track how much distance an animal has covered, then can upload recorded data to its services.

The company says it is the first cloud-based health-care service for dogs.

It also tracks stress level, based on whether the dog shakes or not, and external temperature, taking measurements at 10-minute intervals. The device can store up to 14 days of such information, and transfers data to an Android-based smartphone for uploading using touch-card technology, similar to that used in many public transportation and e-payment systems.

The electronics maker said its “Wandant” pedometer, which combines “wan,” the Japanese slang for dog, and “pendant,” will go on sale in Japan on Wednesday for about 9,800 yen (US$120). The price includes a year’s subscription to the supporting cloud service.

“We are considering launching abroad, but no decision has been reached yet,” said spokesman Joseph Dean.

The accompanying online service can present detailed information about a dog’s workout habits, including how many steps it has taken hour by hour on a given day, as well as when it got nervous and shook, and what time it ate and relieved itself, though the latter information must be checked and entered by hand. The web service can also store photos and diary entries.

Fujitsu said the Wandant counts doggy steps using its three-axis accelerometer to calculate the number and speed of steps, adjusting for the leg length of different animals.

The pedometer weighs 16 grams, measures 46 millimeters by 28.4mm by 12.5mm, and comes with a small case to attach to a dog’s collar.

In anticipation of Wednesday’s launch, Fujitsu has launched a website in Japanese where users can register, and an accompanying Facebook page.