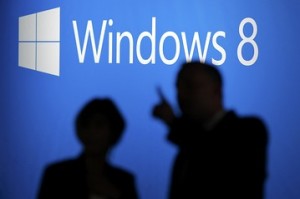 Microsoft’s stock took a beating over the weekend after a pair of research firms said PC shipments in the first quarter were down as much as 14 percent from the year before.

As of 4pm on Thursday, shares of Microsoft were down nearly 5 percent to $28.82.

Other technology stocks, including those of Dell, Hewlett-Packard and Intel, were also off, down eight-tenths of a percentage point, 6.5 percent and 1.7 percent, respectively.

In its estimate of first-quarter PC shipments Wednesday, research firm IDC partly blamed Microsoft’s Windows 8 for the drop in sales, said HP’s shipments declined 24 percent compared to the same quarter of 2012, and said Dell’s shipments dropped 11 percent. HP and Dell were ranked by IDC as the world’s largest and third-largest PC sellers.

Goldman Sachs analyst Heather Bellini changed her recommendation from “neutral” to “sell,” while Rick Sherlund of Nomura and Stephen Turner of Hilliard Lyons switched their positions from “buy” to “neutral,” according to Bloomberg.

In a note to investors quoted by Barron’s last week, Rangan noted that about 25 percent of Microsoft’s Windows revenue stemmed from consumer PC purchases, which he presciently said would be lower than expected for the quarter.

Rangan also reiterated what other analysts – both industry and financial – have said since last autumn that display shortages have kept prices of touch-enabled Windows PCs too high for consumers to stomach.

When asked to explain that comment, Moorhead cited the intertwined divisions at Microsoft, where Windows, although not the group that brings in the most revenue, is the foundation that the Business – responsible for Office – and the Server and Tools divisions stand upon. Without Windows, and its dominant position among operating systems, the thinking goes, Office sells next to no suites and Server and Tools may as well shut the doors.

“Windows is the driver [for Microsoft’s revenue],” Moorhead said in an interview last week. If Windows sales slide because PC sales have badly slumped – and they look likely to languish for the foreseeable future – the rest of Microsoft may follow, albeit not immediately.

“Microsoft has a tremendous amount of exposure here,” said Moorhead. “What [analysts like Rangan] are doing is looking beyond some reasonably good financials and asking, ‘What if the franchise really starts slipping away?'”

Moorhead wasn’t counting Microsoft dead and gone – “The game is not over with,” he said – but neither was he overly optimistic. “So far, their prognosis doesn’t look good at all.”

Microsoft will hold its quarterly earnings call with Wall Street analysts next week, on April 18, when it will reveal revenue figures.