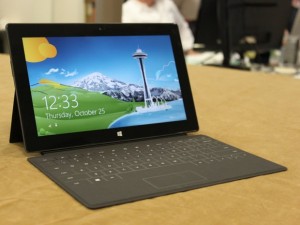 Tablet makers have tried to chip away at Apple’s popularity by offering much cheaper products, but Microsoft has taken the unusual step of going head-to-head on pricing with the iPad.

An analyst says there’s good reason for the Surface price tag, which starts at $499, the same price as basic versions of Apple’s latest iPad.

While previous releases of Windows operating systems have spurred a surge in PC shipments, that hasn’t been the case with Windows 8. That’s according to Aysmco research analyst Horace Dediu, who says that while there has been growth if you combine the traditional PC and tablet markets, any such growth comes on the tablet side, indicating “the shift toward tablet computing is clear.”

It makes sense when you consider that user interface experts — and lots of regular people — have judged the touch-centric Windows 8 Start Screen to be tough for PC users working with keyboards and mice to use. While using the modern tiles-based UI is a snap on touchscreen devices, it requires too much cursor hovering, right-clicking, and guessing for people working on traditional PCs.

While Microsoft has succeeded in offering a good OS for tablets — if not so much for PCs — how the company prices its hardware is particularly relevant, especially if it wants to succeed in moving to a tablet-based computing model.

Dediu points out that for years Microsoft has charged PC makers both Windows and Office licenses — last quarter it was roughly $52 for Windows and $67 for Office.

“The problem for Microsoft is that pricing systems software at $50 and a suite of apps at $67 for a tablet that costs $200 to the end-user is prohibitive. Firstly because an OEM could not justify paying $50 to Microsoft while competing with another vendor whose (Android) software license costs nothing,” Dediu writes.

Another issue, he says, is that tablet buyers are going to find it difficult to justify spending nearly $70 for Office when most mobile apps are cheap. For instance, Apple only charges $10 each for its word processing, spreadsheet and presentation apps.

It makes sense, then, that Microsoft is making its Surface tablets itself and pricing them right around what Apple is getting for its iPad. Microsoft wants to capture comparable margins, he said.

It remains to be seen whether the Surface tablet can really stand up to the iPad in the long term.

PCWorld’s Jon Phillips said “Surface RT is packed with productivity potential, and finds a certain measure of success in reinventing the tablet form factor. But its hardware isn’t perfect, and its Windows RT operating system lacks flexibility and app support.”