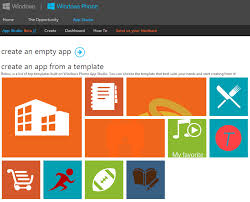 The hosted service was launched two weeks ago in a bid by Microsoft to increase the number of applications available on Windows Phone by allowing users to create apps without writing any code. The service lets users choose from a number of templates to get started and then add content such as images, videos, RSS and Twitter feeds.

So far, the response has been well above what Microsoft expected, according to a blog post on Monday.In the first 48 hours, Microsoft saw more than 20,000 people from all over the world starting more than 30,000 projects, and on Monday it crossed 55,000 active projects. To help manage demand, the company implemented a temporary access code system, it said.

Microsoft is also making some fundamental changes to improve App Studio’s overall performance and the scalability of the system. There have been a few hiccups in the first two weeks of availability, according to Microsoft. The company is also adding new functionality; users can choose from new templates and there are connections to more external data sources, including Flickr, which users have been asking for.

The company didn’t provide any details on when Windows Phone App Studio would become generally available.

The availability of more apps is key for Windows Phone’s continued growth, according to Anshul Gupta, principal research analyst at Gartner. Sales of Windows Phones to end users increased to 7.4 million during the second quarter, which was enough to surpass sales of BlackBerry for the first time. But the OS still only has a 3.3 percent market share, according to Gartner.

“While Microsoft has managed to increase share and volume in the quarter, Microsoft should continue to focus on growing interest from app developers to help grow its appeal among users,” Gupta said.