Apple and Samsung were almost equally able to keep customers in their respective smartphone folds over the last 12 months, an analyst said Monday. 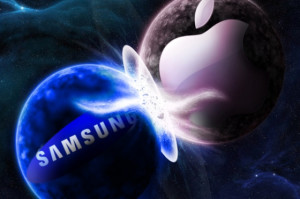 “Apple has built one of the world’s most successful brands, and it’s well known for the loyalty of its customers,” said Michael Levin, co-founder of Chicago-based Consumer Intelligence Research Partners (CIRP). But Samsung’s not that much different.

“You can hate each other as much as you want, but you’re the same,” said Levin of the two groups.

According to CIRP, 42 percent of iPhone buyers over the last year had upgraded from an older iPhone, a sign of customer loyalty.

The nearly identical statistics for Apple and Samsung were unexpected. “It really surprised us, that Samsung’s brand loyalty was nearly equal Apple’s,” Levin said.

For those figures and others Levin cited, CIRP had tallied four quarterly surveys conducted between July 2012 and June 2013; each survey polled 500 Americans who had bought a smartphone in the preceding 90 days.

Levin attributed Samsung customer loyalty to its aggressive brand marketing, including in-store placements and a strong string of television ads. “Samsung threw a lot of money at [brand awareness] and to a large extent they succeeded,” he said.

There were differences between the two companies’ ability to woo each other’s customers, however. Among people who switched brands, Apple was able to pilfer three times as many Samsung customers (33 percent) as Samsung was able to steal from Apple (11 percent), Levin said.

Meanwhile, Samsung had the advantage over Apple in drawing customers from so-called “feature” phones, the basic models whose sales were eclipsed by smartphones for the first time in the quarter that ended June 30. CIRP’s data said that 37 percent of Samsung smartphone owners had upgraded from a feature phone, while only 26 percent of Apple customers had dumped a basic model for an iPhone.

Levin credited Samsung’s broader smartphone portfolio — it has many more models than does Apple, with a wider range of prices — for the company’s ability to attract feature phone owners.

Generally speaking, Apple smartphone owners were slightly younger than Samsung’s customers, and more likely to have an annual income over $75,000 and a college or advanced degree.

Apple and Samsung are nearly neck-and-neck in their ability to hang onto customers. (Image: Consumer Intelligence Research Partners.)