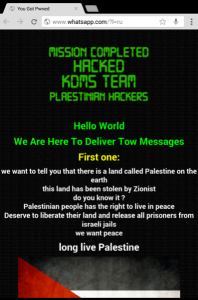 Network Solutions is investigating an attack by a pro-Palestinian hacking group that redirected websites belonging to several companies.

Avira said its own network and customers were not affected, but that the DNS (Domain Name System) records — administered by Network Solutions — were changed to point to other domains, which is known as DNS hijacking.

“It appears that our account used to manage the DNS records registered at Network Solutions has received a fake password-reset request which was honored by the provider,” the company wrote on its blog. “Using the new credentials, the cybercriminals have been able to change the entries to point to their DNS servers.”

No malicious code was delivered by the domain to which Avira Web surfers were redirected to, the company said.

Hackers have had notable successes in recent months compromising DNS providers. The DNS allows a domain name, such as idg.com, to be translated into an IP address that can be called into a browser.

Companies such as Network Solutions hold those DNS records, which if modified, can send Web surfers to different domains.

Earlier this week, hosting provider LeaseWeb saw its main domain redirected to an incorrect IP address after hackers apparently obtained the administrator password from the company’s domain registrar. The KDMS team said it was responsible for that hack.

In August, hackers compromised an Australian IT services company, Melbourne IT, and modified DNS records that affected Twitter, The New York Times, the Huffington Post and ShareThis. A pro-Syrian group, the Syrian Electronic Army, claimed responsibility.

Melbourne IT said an account belonging to a reseller of its services was compromised through a targeted spear-phishing attack, which allowed hackers to change the DNS records for several domains. Spear phishing involves sending an email with malware or a malicious link intending to infect the recipient’s computer.

KDMS, which could not be immediately reached, posted several screenshots on Twitter, including one that affected WhatsApp’s domain. The message asserted that the region known as Palestine has been stolen, and that prisoners should be released from Israeli jails.