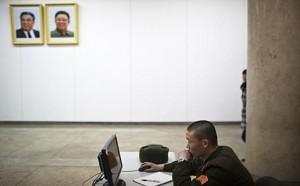 Internet connectivity in North Korea was restored on Friday following a 36-hour outage that the country’s official media blamed on international hacking.

Connections to the Star, North Korea’s sole Internet service provider, hit problems on Wednesday, when websites became inaccessible from outside the country. The sites remained largely offline throughout the incident, although occasionally made brief returns.

North Korea doesn’t have much in the way of Internet connectivity and there is little redundancy in its connection. Its main connection runs via China Unicom in neighbouring China, and there is also a back-up satellite Internet connection via Intelsat. The country has just 1,024 IP (Internet protocol) addresses, making its national network more like that of a medium-sized company than an entire country.

Only a few thousand people are estimated to have direct Internet access – mainly high-ranking government officials and scientists – and the country has only a handful of public websites. Most of them carry propaganda from the state-run news media. The vast majority of the country has access to a nationwide intranet, which runs on the same technologies as the global Internet but has no connectivity outside of the country.

Renesys, a company that analyses global Internet connectivity, said it first observed problems at 1am GMT on Wednesday. That would have been 10 in the morning in Pyongyang. Connectivity was largely lost for about 36 hours and returned late Thursday local time, although wasn’t back to normal until Friday, according to Renesys data.

North Korea’s state-run media was silent about the outage while it was under way, although on Friday the official Korean Central News Agency came out swinging against the U.S. and its allies. It said the outage was due to an “intensive and persistent virus attack,” although offered no further details.

“The DPRK will never remain a passive onlooker to the enemies’ cyber attacks that have reached a very grave phase as part of their moves to stifle it,” it said, using the official name for the country, The Democratic Peoples’ Republic of Korea.

Such bluster is typical of attacks on the U.S. in state-run media outlets.

The outage came against the backdrop of heightened tension on the Korean peninsula. The recent imposition of additional sanctions on the country by the United Nations Security Council and annual war games between the U.S. and South Korean forces have led the DPRK to threaten retaliation.